Woman and Social Progress: A Discussion of the Biologic, Domestic, Industrial, and Social Possibilities of American Women 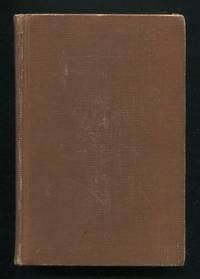 by Nearing, Scott, and Nellie M.S. Nearing
New York: The Macmillan Company. Fair. 1912. First Edition. Hardcover. (no dust jacket) [ex-library with many markings, labels, considerable shelfwear, etc.; a reading/reference copy only] A reference/reading copy only (ex-Brooklyn Public Library) of this informative work by this noted American radical economist, educator, writer, political activist, and pacifist, and his then-wife -- who, one suspects, might actually have deserved top billing on this particular book. (The book apparently wasn't considered important enough to even rate a passing mention by Nearing biographer Stephen Whitfield, who also has very little to say about Nellie herself, at one point referring to her slightly dismissively as "a suffragist with a doctorate.") The text is divided into four sections: Woman's Innate Capacity; Environmental Influences Upon American Woman; The Opportunities Before American Women; Women and the Future. . (Inventory #: 25045)
$35.00 add to cart Available from ReadInk
Share this item
ReadInk
Offered by