A Woman's Career: The Exactions and the Obstacles 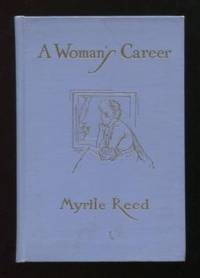 by Reed, Myrtle
New York/London: G.P. Putnam's Sons/The Knickerbocker Press. Very Good+. 1914. First Edition. Hardcover. (lavender cloth with gilt lettering and illustration; no dust jacket) [attractive little book, top edge gilt, tiny stain on front cover]. Posthumously-published essay by this popular and prolific writer ("recently discovered among [her] papers," per the publishers' note), in which "she writes with her accustomed incisive humour in regard to the position of the working woman." This isn't some kind of proto-feminist exhortation to the ladies to get out into the workforce, however -- it is, rather, a paean to the women who "keep house," and is both funny and insightful with regard to how much goddamn WORK it is to manage a household, while the breadwinning hubby goes off to while away his day at the office. "A man thinks he does well if he is a capable lawyer," she writes, but "his wife must have all the qualities of an excellent cook, chambermaid, and laundress, if not the actual physical strength of those women. She must know how to bring up children, train servants . . . must be a good dressmaker, for both the children's clothes and her own; she must keep the wardrobe of the family in repair, and run a porterhouse-steak establishment upon a mutton-stew income." And on top of all that: "When he comes home, she must be calm, serene, beautifully dressed, and greet his grouch with a smile." Reed (1874-1911), a Chicago native, was a novelist, poet and journalist (who also wrote a lot of cookbooks, many under the pseudonym "Olive Green"); she committed suicide at the age of 36, with a coroner's jury ruling that her death was caused by "an overdose of sleeping powders [taken] while temporarily insane from insomnia and depression." . (Inventory #: 25004)
$50.00 add to cart Available from ReadInk
Share this item
ReadInk
Offered by