The Rise of Elsa Potter 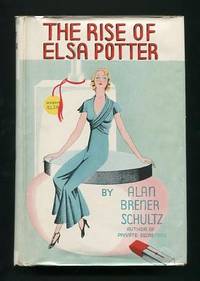 by Schultz, Alan Brener
New York: Simon and Schuster. Very Good+ in Very Good+ dj. 1932. First Edition. Hardcover. [slight fraying to cloth at base of spine, otherwise just minimally worn, although there are some gluestains on both pastedowns where the jacket flaps were apparently once glued down; the jacket is nice and clean, with just a bit of edgewear, and although flaps are somewhat wrinkled, they have no matching gluestains, which would seem to indicate that the jacket had previously been encased in some kind of jacket protector -- which in turn might suggest that it had once been a rental-library book, although the lack of wear or any kind of stamping or other markings would suggest otherwise]. (B&W photographs) Uncommon novel about a ruthless career woman who rises to the top of the cosmetics industry (the "beauty racket"), basically by treating "the several men who attracted her" in the same manner "as most men deal with women. They were not permitted to obstruct her path. Her maneuvers constituted a Premier [I think they must mean Primer] for Women -- for women in a man's world." A little roman-a-cleffiness is suggested by the teasing jacket blurb, which calls this "the interesting story of an unusual woman whose career you may think you recognize." The jacket text also includes a rather strange and slightly apologetic note from the publisher saying, in essence, "if you don't like this, well, maybe we made a mistake in selecting it for publication." In an unusual feature, the text is illustrated by four full-page photographs (credited to "Lazarnick," presumably Nathan Lazarnick), obviously stagings of bits of action from the novel, but not in the style of movie stills (in other words, there would be no danger of mistaking this for a "photoplay edition"); one of the photos is repeated on the rear jacket panel. This was the last of three published novels by this author, about whom I've been able to learn nothing; his first book, "Private Secretary," was filmed by RKO in 1931 as BEHIND OFFICE DOORS, so maybe he was lured to Hollywood (as many were) and vanished (as many did). . (Inventory #: 19275)
$200.00 add to cart Available from ReadInk
Share this item
ReadInk
Offered by