How to Write and Sell Film Stories; with a complete shooting script for "Marco Polo" by Robert E. Sherwood 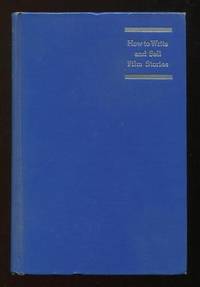 by Marion, Frances (incl. script by Robert E. Sherwood)
New York: Covici Friede. Very Good+. (c.1937). First Edition. Hardcover. (no dust jacket) [solid copy, moderate wear to top and bottom edges of covers, silver lettering on both spine and front cover is bright and easily readable]. Scarce book on the craft and business of screenwriting, by the woman who was one of its pioneers: she sold her first scenario to the Biograph Company in 1912, and was at the very top of her profession until the mid-1930s. Her numerous credits in the silent film era included many of Mary Pickford's starring vehicles, and after talkies came in she was responsible for DINNER AT EIGHT (1933), RIFFRAFF (1936), MIN AND BILL (1930), THE BIG HOUSE (1930), THE CHAMP (1931) -- winning Oscars for the last two. This book covers all the basics of screenwriting, and while it's certainly dated in one sense, one can't review the list of chapter headings -- Characterization; Plot; Motivation; Theme; Dialogue; Dramaturgy; Emotion; Common Errors; etc. -- without wishing that this text could be made required reading for modern-day screenwriters. (Or maybe it already is, which could account for the paucity of copies in the marketplace.) Included is the complete screenplay "Marco Polo" (produced by Samuel Goldwyn as THE ADVENTURES OF MARCO POLO in 1938) by Robert E. Sherwood. . (Inventory #: 25057)
$250.00 add to cart Available from ReadInk
Share this item
ReadInk
Offered by