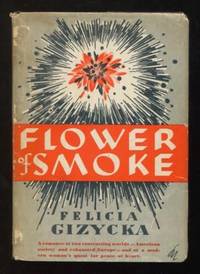 by Gizycka, Felicia
New York: Charles Scribner's Sons. Very Good in Fair dj. 1939. First Edition. Hardcover. [book is modestly shelfworn, slight fraying to cloth at top of spine; jacket is well-worn, with several surface-scrapes on spine, a bit of paper loss at top of spine (extending a little into the rear panel), various tiny nicks and chips]. INSCRIBED and SIGNED by the author on the ffep, "For an Excellent Nurse / From a Not-So-Excellent / Author." Felicia and her mother Eleanor Medill "Cissy" Patterson (who wrote a couple of novels as "Eleanor Gizycka" in the 1920s) had a famously fractious relationship, which may have reached its nadir with the publication of this novel, Felicia's second and last. Both ladies fashioned themselves at various times as "Countess Gizycka," even though Eleanor's marriage to Count Josef Gizycka had ended in an acriminous divorce in 1917. Some years earlier, Felicia had been taken to London by her mother when she fled her husband's home in Poland, and was subsequently kidnapped back by her father, who for a time hid her away in an Austrian convent. Eleanor eventually regained custody and brought her back to the U.S., where, according to one account, she soon proved to be "overwhelmingly uninterested in her daughter, who was brought up by servants." As fiercely independent as her mother, Felicia married the up-and-coming journalist Drew Pearson in 1925, divorced him three years later, and generally lived the international high life, flapping around to Biarritz, London, Paris, New York, Washington, Deauville and the hunt country of Virginia. Her first novel, "House of Violence" (1932), reflected that peripatetic jazz-age life, and "Flower of Smoke," if anything, was even more overtly autobiographical, telling of the "daughter of an American woman and an Austrian count, living in America and Europe but at home in neither, impelled by a strange discontent, drifting into love and marriage," and so on -- all closely mirroring Felicia's own life. In the novel, she kills off her "rather frigid" American mother pretty early on, but reincarnates her, more or less, in the figure of her fearsome "Aunt Flavia," which Eleanor apparently regarded as a thinly-disguised portrait of herself. The bad blood between the two continued even after the former's death in 1948, when Felicia sued to invalidate her mother's will and thereby secure for herself a one-quarter interest in the controlling stock of the Chicago Tribune. (The matter was promptly settled out of court, with Felicia reportedly getting a $400K cash payout.) Signed by Author . (Inventory #: 24966)
$100.00 add to cart Available from ReadInk
Share this item
ReadInk
Offered by