Factors in the Sex Life of Twenty-two Hundred Women 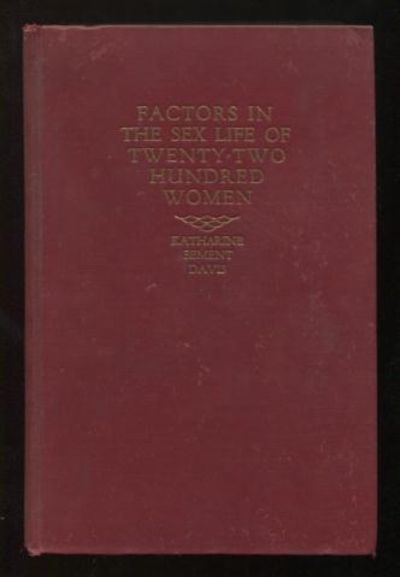 by Davis, Katharine Bement
New York/London: Harper & Brothers. Very Good+. (c.1929). 7th printing. Hardcover. (no dust jacket) [good solid book, some age-toning to edges of text block, gilt spine lettering rubbed (but still readable), front cover lettering still bright]. (Publications of the Bureau of Social Hygiene) Series (charts, tables) This groundbreaking study was undertaken by a New York City-based agency, the Bureau of Social Hygiene, that had been founded by John D. Rockefeller Jr. in 1913, with the avowed purpose of discovering "conditions among so-called normal women." (This was in reaction to the fact, as explained in the Introduction, that much of the available data up until that time had been gathered "from records and studies of women confined either in hospital for the physically or mentally sick or in institutions which care for delinquents," or from the case records of various kinds of doctors (including psychiatrists) "to whom application is made for help in some ill." The researchers sent out 10,000 letters seeking participants in the study, particularly targeting "normal married women," women's club members, and alumni of women's colleges; in the end, they ended up with about 2,200 written case histories from which to extrapolate their data. (Apparently no personal interviews were conducted.) Katharine Bement Davis (1860-1935), who directed the study in her capacity as general secretary of the Bureau of Social Hygiene from 1918 until her retirement in 1928, was a prominent Progressive Era activist, teacher, social worker, and advocate for women's rights, who had been one of the first women in the U.S. to earn a Ph.D. in Political Science-Economics (at the University of Chicago). She had extensive experience in prison management (she was the first director of the New York State Reformatory for Women when it opened in 1901), and was a strong proponent of science-based prison reform; in 1914 she became the first woman to head a New York City agency when she was appointed the city's Commissioner of Correction. (She was also a eugenicist, but as the saying goes: nobody's perfect.) Upon her retirement she was feted with a testimonial dinner at the Waldorf-Astoria Hotel, with a stellar guest list that included Jane Addams, Eleanor Roosevelt, Carrie Chapman Catt, and Lillian Wald. It's also worth noting that Ms. Davis was credited with the screenplay for the 1919 silent film THE END OF THE ROAD, produced by the American Social Hygiene Association; it was advertised as "A Picture with a Purpose," that being to educate young women about the perils of premarital sex and venereal disease. **** NOTE that additional shipping charges will be requested for international shipping of this moderately heavy book, or for Priority Mail service to U.S. destinations; if this concerns you, please contact us for a shipping quote before placing your order. **** . (Inventory #: 24971)
$65.00 add to cart Available from ReadInk
Share this item
ReadInk
Offered by