The House of Violence 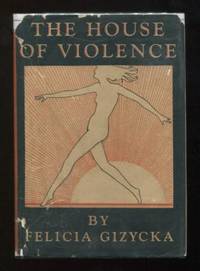 by Gizycka, Felicia
New York: Charles Scribner's Sons. Very Good+ in Poor dj. 1932. First Edition. Hardcover. [book is modestly shelfworn, light soiling to edges of text block; jacket lacks its front flap, has numerous tears and small chips, although the provocative front panel illustration is intact]. Very scarce novel by the daughter of Eleanor "Cissy" Patterson (who wrote a couple of novels herself in the 1920s under her former married name, Eleanor Gizycka). Felicia and her mother both fashioned themselves at various times as "Countess Gizycka," even though Eleanor's marriage to Count Josef Gizycka) had ended in an acriminous divorce in 1917. Some years earlier, Felicia had been taken to London by her mother when she fled her husband's home in Poland, and was subsequently kidnapped back by her father, who for a time hid her away in an Austrian convent. Her mother eventually regained custody and brought her back to the U.S., where, according to one account, she soon proved to be "overwhelmingly uninterested in her daughter, who was brought up by servants." As fiercely independent as her mother, Felicia married the up-and-coming journalist Drew Pearson in 1925, divorced him three years later, and generally lived the international high life, flapping around to Biarritz, London, Paris, New York, Washington, Deauville and the hunt country of Virginia. This novel, her first, reflects that life: one writer characterized it as "jazz-age aristocratic experimentalism awash in alcohol and unhappy rich kids," further observing that "drink, divorce, a distant mother and violent father are the themes, along with constant travel with playboys in pursuit." And if that wasn't autobiographical enough, she doubled down with her second, and last, novel, "Flower of Smoke," published in 1939, which further estranged her from her mother with its portrayal of a socialite mother with a heart of stone. . (Inventory #: 24945)
$200.00 add to cart Available from ReadInk
Share this item
ReadInk
Offered by