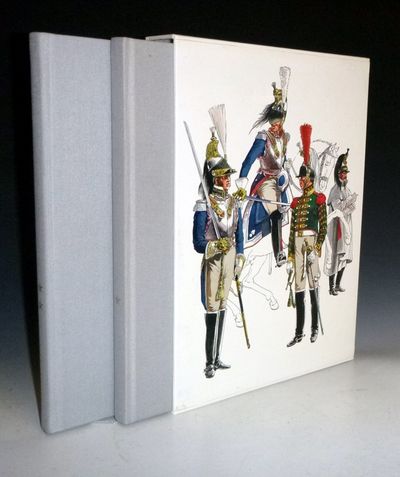 by Coppens, Bernard; P. Courcelle; D. Lordey, M. Petard
(Entremont Le Vieux, France, 1997 and 1998: Quatuor. Limited Edition. Quarto. In two volumes issued in a small print run limited to only 990 copies. The present set is numbered 818. French text. Volume I: 185(1)pp. Troupes Francaises and Troupes Alliees: illustrated with color plates which include weapons plates: staff, imperial guard, cavalry, infantry, artillery and engineering, navy, Confederation of the Rhine and others Volume 2: 185(1)pp. Troupes etrangeres: illustrated with color platess which include those of England, Austria, Prussia, Russia, Spain. It is one of the essential items on the uniforms Both volumes bound in gray cloth, pictorial pastedowns to upper boards spines tamped with one and two gilt stars, housed within color pictorial paper covered boards. (Inventory #: 022437)
$190.00 add to cart or Buy Direct from
ALCUIN BOOKS, ABAA
Share this item