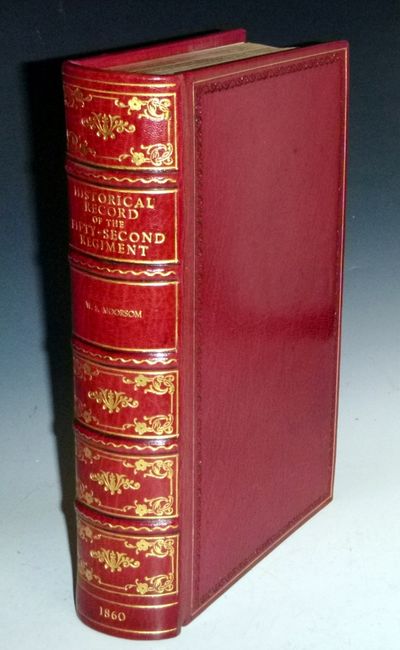 by Moorsom, W.S. (William Scarth), 1804-1863
London: "Aticot" Antiquarian Booksellers, 1860. First Edition. Quarto. Portrait frontispiece, xvi, 437 pages, the subscriber's edition with subscriber's list, illustrated with 25 plates of which 3 are full page and several tinted maps, all with tissue guards present. In his work at the Royal Military College, Sandhurst, he distinguished himself in his work on fortification and military surveying. This was his major work focusing on the fifty-second but providing major details on their leaders with the three battle plans of Waterloo. They first distinguished themselves in the American War of Independence (see full color plate on. page 33) where he notes the fall of Forts Washington and Lee as well as the disaster at Germantown with references to Anthony Wayne. They landed in Portugal in 1808 and both regiments served through the Battle of Vimeiro. Their losses were heavy all through the Battle of Waterloo. Beautifully bound in a modern full red leather, boards ruled in gilt with blind stamped decorative rolls, raised bands with compartments fully decorated in gilt, lettering and top edge gilt, new marbled endpapers, housed within a custom cloth slipcase. (Inventory #: 022446)
$475.00 add to cart or Buy Direct from
ALCUIN BOOKS, ABAA
Share this item