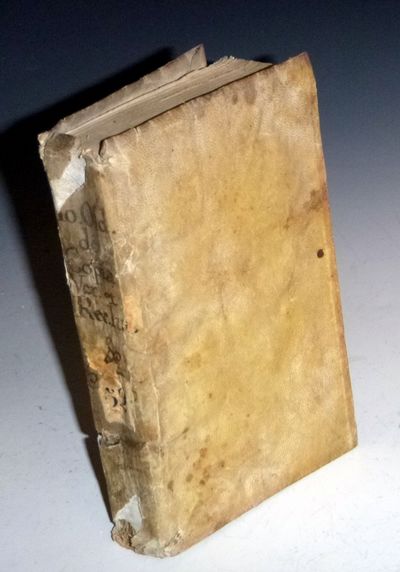 by Oldendorp, Johann (1480-1567)
Lugduni: Apud. Seb. Gryphium, 1546. Small Octavco. 431 pages, [11)pp. index. The work is arranged alphabetically/Printer's device of Sebastian Gryphius on the title page. This work is on Roman law and prefaced on the title page with Psalm 81. Oldendorp, after his conversion to Lutheranism based his views both on Melanchthon's intricate theory of natural law but also on Luther's view of the law. He developed an original theory of equity and equitable law making along with law enforcement so that the synthesis of Luther, Melanchthon, and Oldendorp became the dominant view of legal, political and social theory in Germany and Scandinavia for the next three centuries. He was appointed by the Landgrave Philipp I of Hesse to Marburg which became the first Protestant university. The printer of this work Gryphius In the 1540s was the highly reputed 'Prince of the Lyon book trade'. He promoted the local humanist culture, and his books were prized for their clean lay-out and accuracy. His shop became both a literary salon as well as where important contemporary humanist works were published. There is an additional printer's mark after the last page which has the gryphon motif but not the same as his on the title page. In the original flexible vellum binding with the inked title on the spine and bottom fore-edge, some loss of vellum to head and foot, lacks front preliminary sheets, splitting to hinges. Copies at: LC, Harvard, U of Illinois, and Switzerland Kantonbibliotek. (Inventory #: 022440)
$475.00 add to cart or Buy Direct from
ALCUIN BOOKS, ABAA
Share this item