A Narrative of the Campaign of the British Army in Spain Commanded By His Excellency Sir John Moore,..authenticated By Official Papers and Original Letters 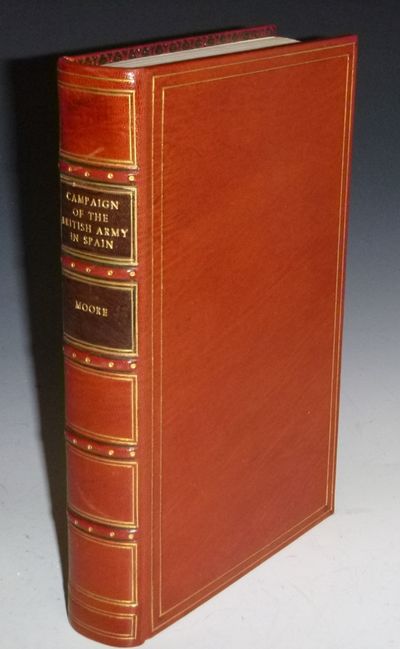 by Moore, James Carrick
London: J. Johnson, 1809. Octavo. 4th edition. 388, 136 (expanded with the expanded appendix and two folding hand colored maps (one of Spain and Portugal, the other of the retreat to Corunna). Special pastedown on last free endpaper is the long (printed) inscription in Latin for Sir John Moore's monument by Dr. Parr dated 1814. Sir John Moore was fatally wounded by a cannon shot when he led his troops who were near starvation and about to be enveloped by both Marshal Foult and Napoleon. This work was reprinted five times during 1809 with the 3rd and 4th having the appendix and the hand-colored maps. Interestingly enough the publisher Joseph Johnson was a known radical whose close friends were Thomas Paine and Mary Wollstonecraft. It is one of the remarkable stories how the British who were surrounded and short of supplies, especially enough food, thus, the retreat in which 6,000 of the 30,000 army perished but that they survived under such horrendous circumstances was often called a miracle. A P. J. Kerry notes in his long article in the Journal for the Society for Army Research, there is a treasure trove of transcripts of official documents and arranged so as to let the researcher come to their own conclusions. While the Tories treated Moore with contempt, the Whigs came to his defense. Later historians have come to the conclusion that he did all that a leader could do though he did not know Napoleon had already withdrawn and returned to France. An important contribution to the study of the Peninsular campaign. Bound in a modern brown leather with boards trimmed with double gilt rules, raised bands, double brown leather spine labels gilt, compartments ruled in gilt, renewed marbled endpapers, small piece torn away to fist map, (see picture below hand on left) Internally clean and bright. (Inventory #: 022449)
$425.00 add to cart or Buy Direct from
ALCUIN BOOKS, ABAA
Share this item