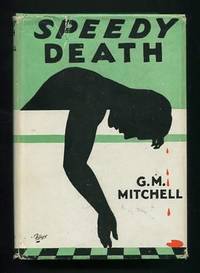 by Mitchell, Gladys
New York: Mason Publishing Co.. Very Good+ in Very Good+ dj. 1932 (c.1929). Reprint. Hardcover. [spine turned, light wear to base of spine and bottom corners; jacket slighty faded at spine, with tiny tears at several corners, one-inch closed tear and associated creasing at top of front panel]. An early reprint of the prolific Ms. Mitchell's first novel (first published in the U.S. by Dial Press in 1929), in which a famous arctic explorer is found dead in a bathtub at an English country house -- and is discovered to have been a woman! (Much, I suppose, like a purchaser of this book by "G.M. Mitchell," as she is called in the front jacket panel, might have been surprised to have learned the author's gender only upon turning to the title page.) As Michele Slung wrote of Mitchell, she's "a special taste" whose work "has been little published in the United States since the beginning of her career [yet] to mystery readers in England who have followed the classic school she is practically an institution." Considered in her heyday to be in the same league as Agatha Christie or Dorothy L. Sayers, she wrote a total of 66 books featuring psychoanalyst-writer-sleuth Mrs. Beatrice Adela Lestrange Bradley, introduced in this book -- one or more every year until her death in 1983. As Slung also notes: "To put it mildly, eccentric goings-on are Mitchell's hallmark," with much attention devoted to "witchcraft, the supernatural, and folklore esoterica." It might also be observed that very few (if any) long-running detective series have featured a central character whose creator has taken such pains to make an unappealing, indeed almost repulsive figure: the very first mention of Mrs. Bradley in this, her introductory exploit, has another character describing her as a "little, old, shrivelled, clever, sarcastic sort of dame [who] would have been smelt out as a witch in a less tolerant age." And the author herself is scarcely more charitable, writing of her "nasty, dry, claw-like hands, and her arms, yellow and curiously repellant," employing adjectives like "reptilian," and describing her (more than once) as resembling a "playful alligator." Miss Marple she isn't! . (Inventory #: 19263)
$1500.00 add to cart Available from ReadInk
Share this item
ReadInk
Offered by