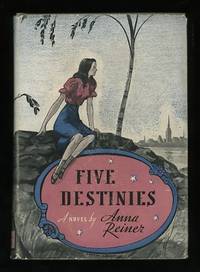 by Reiner, Anna (pseud. for Anna Gmeyner) (translated from the German by Philip Owens)
New York: Alfred A. Knopf. Near Fine in Very Good+ dj. 1939. First American Edition. Hardcover. [nice copy, minor shelfwear, spine very slightly turned; jacket shows a bit of wear at corners and along the top and bottom edges, very shallow chipping at spine ends, moderate soiling to rear panel]. Anti-Nazi novel, by "a German refugee living at present in London," and writing under an assumed name. The author, born in Vienna, had subsequently relocated to Berlin, where she was active in the cultural scene (she had several plays produced, and is said to have worked with Bertolt Brecht and film director G.W. Pabst); fortunately, she happened to be working in film production in Paris when Hitler came to power in 1933. This novel (originally published in Amsterdam under the title "Manja," and later in England as "The Wall") deals with the "swift, shattering changes" that event brought to the lives of its five protagonists, four boys and a girl from "five families of widely separate background and position" in German society, all born in 1920, who had grown up as close friends. Interestingly, her daughter, Eva Ibbotson, also became an author, primarily of books for children; her 1993 best-seller "The Morning Gift" evoked this same time and place, and was informed by her own experiences in escaping from Nazi-ruled Austria as a child. . (Inventory #: 15690)
$150.00 add to cart Available from ReadInk
Share this item
ReadInk
Offered by