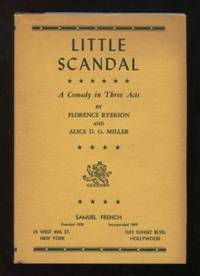 by Ryerson, Florence, and Alice D.G. Miller
New York/Hollywood: Samuel French. Near Fine in Very Good+ dj. (c.1951). First Edition. Hardcover. [nice tight clean book, minimal shelfwear only; jacket a little age-toned at edges and spine, but still quite good-looking]. (B&W photographs) Two veteran screenwriters, both of whom earned their chops during the silent-film days, teamed up for this "up-to-the-minute, laughter-provoking comedy" about a young secretary for a United Nations commission, who "returns to her small-town home with a just-born baby and a not-too-convincing story of how she happens to have him on her hands." Many farcical complications ensue. Ms. Ryerson (1892-1965) came to the movies in the mid-1920s, after having already established herself as a journalist and writer of short fiction; she often wrote in collaboration with her second husband, Colin Clements, who she married in 1927. They co-authored numerous plays (including three that made it to Broadway in the 1940s) and several mystery novels, and Ryerson herself had quite a decent string of movie credits, including as one of the three credited screenwriters on THE WIZARD OF OZ. Ms. Miller (1894-1985) was most active as a scenarist during the 1920s, with just a handful of credits after that. "Little Scandal" had its debut, and perhaps its biggest success, at the Pasadena Playhouse in December 1950; the two (count 'em) photos that illustrate the book are presumably from that production, which had absolutely nobody in it you've ever heard of, with the possible exception of Madge Blake, a character actress who popped up all over the place on American TV in the 1950s and 1960s. . (Inventory #: 24947)
$40.00 add to cart Available from ReadInk
Share this item
ReadInk
Offered by