Sowing Glory: The Memoirs of "Mary Ambree," the English Woman-Legionary 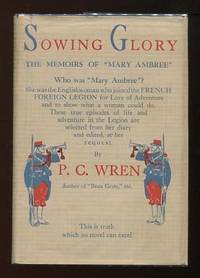 by Wren, Percival Christopher, ed.
New York: Frederick A. Stokes Company. Near Fine in Very Good+ dj. 1931. 2nd printing. Hardcover. [nice clean copy, no significant wear, just a touch of foxing to the fore-edge; jacket a bit darkened along spine, with a few tiny edge-nicks]. Pseudonymous memoir, based on the diary of a woman who purportedly served a five-year hitch in the French Foreign Legion (after having been an ambulance driver during World War I), as "edited and retold" by a guy who did as much to romanticize the F.F.L. as anyone, primarily through his popular "Beau" novels ("Beau Geste," "Beau Sabreur" and "Beau Ideal"), all of which were also filmed. Wren's claims to have served in the Legion himself, however, have been pretty much debunked, so as for the veracity of "Mary Ambree" -- who adopted that pseudonym, by the way, in homage to a real historical figure by that name, an English army captain who fought in England's war against Spain in the late 16th century and subsequently became the subject of a number of popular ballads -- well, mostly we have just Wren's word for it, and since he probably lied about his own service, you can draw your own conclusions. In his Preface, he describes how he received a letter out of the blue from a woman in Belgium, asking him if he would edit and rewrite her diary for publication (no doubt because he was the Famous Foreign Legion Writer). He agreed to have a look, and although completely convinced of its authenticity (as well as the fact that it was actually written by a woman, although he doesn't say exactly how he figured that out), he tried to turn the job down, on the grounds that it was "as terse and dry as a ship's log . . . intriguing but heart-breakingly inadequate." She insisted, however, and gave him carte blanche to rewrite it -- as he put it, to use her facts to provide "the skeleton for a flesh-and-blood body, articulate, moving and alive" -- with the sole condition that he would scrupulously maintain her anonymity. The result, per the jacket blurb, was "truth which no novel can excel." . (Inventory #: 24903)
$100.00 add to cart Available from ReadInk
Share this item
ReadInk
Offered by