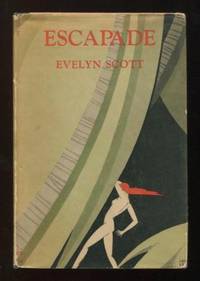 by Scott, Evelyn
New York: Jonathan Cape and Harrison Smith. Very Good+ in Good dj. [1929] (c.1923). Reprint. Hardcover. (price-clipped, sort of; see note) [spine slightly turned, minor shelfwear, tiny exposure of board at bottom front corner; jacket moderately edgeworn, shallow chipping at spine ends, spine faded/browned, the noted-price clipping consists of a triangular piece snipped out of the front jacket flap, about an inch from the bottom (which I suppose is where the price was printed)]. Reissue of the author's "creative autobiography," first published in 1923, which deals with the three years she spent "practically exiled in Brazil," during which "she experienced love, motherhood, social obloquy, pain, isolation in alien and hostile surroundings, and was forced to wage a constant battle against great odds for everything that was precious to her." Ms. Scott's literary star was shining about as brightly as it ever had at the time: her novel "The Wave," generally considered her greatest critical and commercial success, was published the same year as this reissued edition of "Escapade." She had published her first book (of poetry) in 1920, and followed it with a string of novels in a modernist style, which got her a lot of critical attention but didn't result in a wide readership. Critic Grant Overton might have put his finger on it when he wrote of her in 1928: "One does not turn to her work for pleasantness, but for a version of truth." (And what was it that Jack Nicholson said about truth, in that movie...?) While she was at it, she was quite prolific -- in addition to novels, she wrote a play, numerous short stories, essays, reviews, and four children's books -- but both she and her work have largely faded into obscurity. . (Inventory #: 21315)
$85.00 add to cart Available from ReadInk
Share this item
ReadInk
Offered by