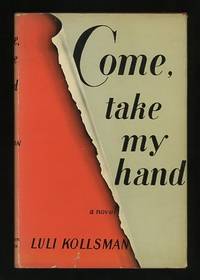 by Kollsman, Luli
New York: Duell, Sloan and Pearce. Very Good+ in Very Good dj. (c.1949). First Edition. Hardcover. [light shelfwear to bottom edge, minor dust-darkening to top page edges; jacket shows a bit of wear at edges and corners, spine a little faded with shallow chipping at top (no loss of text), small ragged closed tear at bottom of front panel, small sticker-removal scar on front flap]. SIGNED boldly by the author on the ffep. Uncommon novel (the author's only book) about "a natural woman" with the wonderful name of Tulip Linden, in a wide-ranging narrative that seems designed to prove that "anything can happen" to her: she has various adventures in New York, goes to Reno for a divorce from a husband she'd apparently left behind in Canada, subsequently re-marries a "mysterious, wise and childlike scientist" that she'd met in New York, and who then goes prospecting for uranium in Nevada (from the air, guided by a spirit medium). The author's biography certainly denotes a busy and varied life, stating that she "was born of a noble German family in Heidelberg, married for the first time at seventeen, moved on to Hollywood at twenty-five, designed custom-built automobiles during the Depression, became a gas-station attendant during the War, established an international salon in New York shortly thereafter." Under the name "Luli von Hohenberg," she had a minor acting career in Germany, and a bit later (now as "Luli Deste") she appeared in a few B-movies in America in the 1930s and early 1940s. From 1944 until her death in 1951 she was married to Paul Kollsman, a noted German-American inventor. (She also had the distinction of having been featured in a 1946 painting by Salvador Dali; even though she was only a small figure in a surreal landscape, the painting was named after her: "Portrait de Luli Kollsman.") This book was also published in Germany unde the title "Du bist wunderbar ..."; OCLC records just seven institutional copies of the first edition, three of which for some reason are in Ohio. Signed by Author . (Inventory #: 16253)
$65.00 add to cart Available from ReadInk
Share this item
ReadInk
Offered by