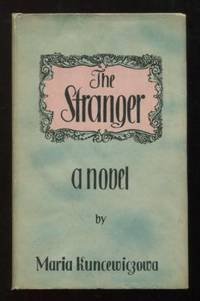 by Kuncewiczowa, Maria
New York: L.B. Fischer. Near Fine in Very Good dj. (c.1945). First American Edition. Hardcover. [nice clean book, just a touch of wear to spine ends; jacket lightly edgeworn, a bit darkened along spine, one tiny closed tear at top of front panel]. Novel about a Polish-born woman musician, who is educated in Russia but feels herself a stranger there -- and finds herself no happier upon returning to her native land, where she "lives insulated in her memories of an unfulfilled love affair and of her broken concert talent [and] takes refuge in fanatical dreams and exaggerated attitudes." The novel would seem to be somewhat autobiographically-inspired, as the author herself was Polish and had originally trained as a singer (although not in Russia) and performed in Germany and Poland before taking up writing. This novel, originally published in Warsaw in 1936, earned her the Gold Laurel (Zloty Wawrzyn) from the Polish Academy of Literature (described on Wikipedia as the "highest opinion-forming authority in the country, in charge of all aspects of promoting and honoring the most outstanding contemporary achievements of Polish literature"). Poland was not the healthiest place to be at the outbreak of World War II, however, and in 1939 she escaped, first to France and subsequently to England, in the summer of 1940. This was the first of her works to be published in English translation, and includes an interesting introduction by the novelist Storm Jameson, who recalls her first meeting with Kuncewiczowa, at a conference of the London P.E.N. in 1942. She later lived in the U.S. for a time, and was a lecturer at the University of Chicago from 1962 to 1968. . (Inventory #: 21378)
$75.00 add to cart Available from ReadInk
Share this item
ReadInk
Offered by