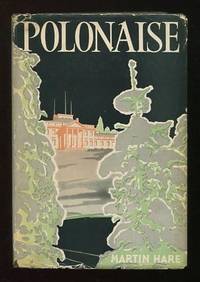 by Hare, Martin (pseud. for Zoë Zajdler, née Girling)
New York: The Macmillan Company. Very Good+ in Very Good dj. 1940. First American Edition. Hardcover. [nice clean book, minor wear at top of spine; jacket has various small nicks along top and bottom edges, some diagonal creasing at bottom of front panel Uncommon novel by an Irish-born author (a woman, by the way) concerning the experiences of three children -- a 15-year-old boy and his two younger sisters -- who are shipped off to stay with a distant relative in Poland while their parents' oh-so-civilized divorce is pending. (The relative, interestingly, is "employed cataloguing the treasures in the Baths Palace at Warsaw [aka the Lazienki Palace], and lives with his family in the Orangery, near the Palace." The dust jacket art, by the way, is an accurate albeit stylized depiction of the Palace.) The focus of the novel is on "the always fascinating contrast between two civilizations and two ways of life," and at least one contemporary reviewer likened the Polish family in the novel to the wacky Sycamore clan in Kaufman & Hart's "You Can't Take It With You." According to the New York Times, the book was written in Warsaw between November 1938 and June 1939, and the narrative ends in the spring of 1939, mere months before the Nazi blizkrieg was to overrun Poland; according to the same review, there is no allusion to the looming war-clouds, but "the air of the book is charged with the imminence of catastrophe." The author was married to a Polish army officer, and they made their home in the Carpathian Mountains; one has to wonder whether they might have been in residence there in September 1939. In any event, Ms. Hare had churned out books pretty regularly throughout the 1930s; per the jacket blurb this was her seventh, but it also appears to have been her last, at least as Martin Hare the novelist. I haven't been able to uncover any specific information about her subsequent life (or death), although there is one additional title credited to her that's held by the British Library, a 1959 translation of a collection of Polish fairy tales. . (Inventory #: 23793)
$100.00 add to cart Available from ReadInk
Share this item
ReadInk
Offered by