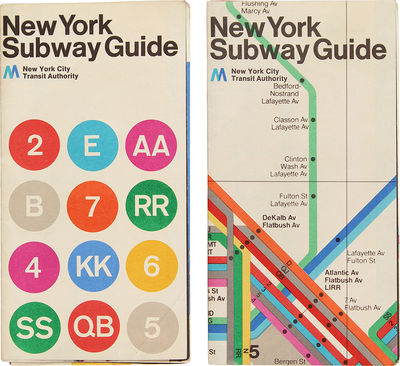 by VIGNELLI, Massimo
New York: Metropolitan Transit Authority, 1972. Both maps machine-folded to be pocket-sized, and light wear, else near fine.. First Editions. 21 x 17.5 inches. Two pocket maps of Vignelli's New York City subway system map, introduced on August 4, 1972. The first features color-coded station and transfer information for each of the lines, and the second features an expanded view of Manhattan, Downtown Brooklyn, and west Queens. Both feature a full system map on the verso. Though critically acclaimed and celebrated for its bold color coding and the network's streamlined clarity, Vignelli's version was initially greeted by New Yorkers with complaints and confusion. The diagrammatic design, modeled after Harry Beck's 1933 map of the London Underground, left familiar geographic references misplaced or almost erased: station locations seemed off, waterways and borough boundaries were faint and misshapen, and Central Park was reduced to a light gray square. After this now iconic 1972 version, MTA published six later editions of the map without Vignelli's input; the first revision in early 1973 reflected the KK line shortened and renamed the K, and QJ line shortened and redesignated the J. (Inventory #: 26131)
$850.00 add to cart or Buy Direct from Harper's Books
Share this item
Harper's Books
Offered by