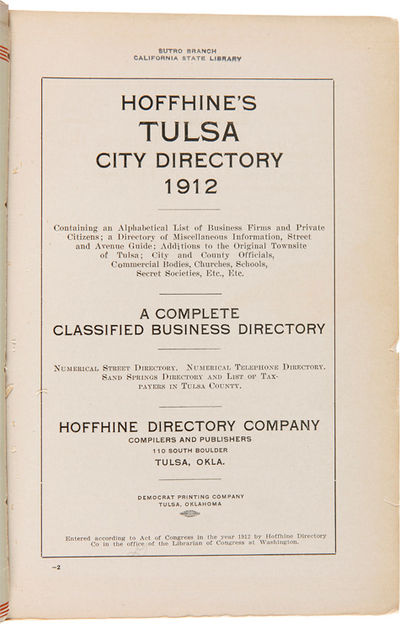 by [Oklahoma]
Tulsa: Hoffhine Directory Company, 1912. xx,[21]-32,32A-32J,33-666pp., plus six leaves of advertisements. Original red calf lettered in gilt and printed tan cloth boards, backstrip renewed in maroon buckram. Minor edge wear and scuffing to boards, hinges broken and also at page 648, with some leaves detached. A few leaves slightly frayed along fore-edge. Ex- Sutro Library, with bookplate on front pastedown and ink stamp on first two leaves and titlepage. Internally clean. A complete copy in overall good condition. An early Tulsa city directory, being the fifth directory published by the Huffhine Directory Company, and printed by the Democrat Printing Company of Tulsa. The directory opens with a twenty-page advertising section touting a wide range of products and services, including the Diamond Drug Company, Indian Records, the Tulsa Boiler & Manufacturing Company, and the Tulsa Daily Democrat newspaper (printers of the directory). An introductory note reports the population of Tulsa in 1912 as 31,525, up from 11,990 when the first directory was printed in 1907. A short section on the major governmental contacts, banks, churches, and other notable organizations is followed by the main section of the directory, about 450 pages, containing an alphabetical listing of the residents and commercial entities of the city. The next section is "Hoffhine's Tulsa Classified Business Directory," comprised of a listing of businesses organized alphabetically by type. These include architects, automobile dealers, bookbinders and bookstores, drilling contractors, oil and gas companies, hotels, theaters, and more. The last section is composed of a street directory organized alphabetically. Greenwood Avenue, the section of north Tulsa most impacted by the Tulsa Race Riots nine years later, lists several businesses (and presumably residents) who would eventually be lost to the riots, such as the Vernon African Methodist Episcopal Church (destroyed in 1921 but rebuilt in 1928), the Economy Drug Store, and three businesses and the residence of Tulsa pioneer African-American businessman Ottaway W. Gurley. The directory includes three pages listing businesses and residents along Greenwood Avenue and at its various intersections, with most entries followed by "(c)" indicating presumably that a "colored" person lives or works there. An early and rare Tulsa directory. (Inventory #: WRCAM55349)
$850.00 add to cart or Buy Direct from
William Reese Co. - Americana
Share this item