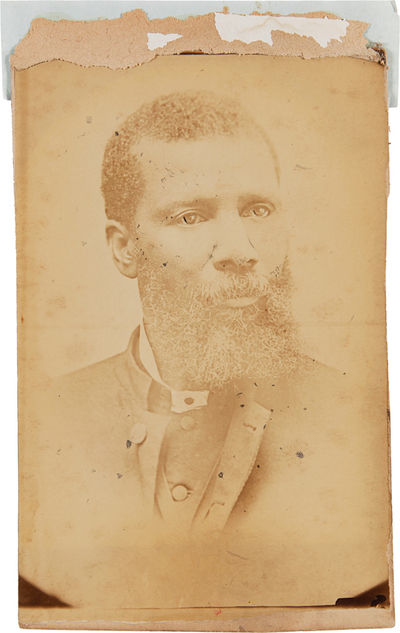 by [Civil War]: [Harrison, Samuel, Rev.]
[N.p., likely Boston, 1865. Albumen photograph, 8 3/4 x 5 3/4 inches, mounted on card. Moderate fading, a bit of spotting in the image. Verso darkened from exposure to wooden backing, now removed from backing and period frame, backing tape still attached to verso along top edge. Remnants from previous mat to top edge. Good, and a worthy candidate for professional conservation. An apparently unrecorded image of Rev. Samuel Harrison, a former slave and fierce abolitionist who served as Chaplain of the 54th Regiment Massachusetts Volunteer Infantry, the famous Civil War regiment of U.S. Colored Troops. Colonel Robert Gould Shaw led the 54th Mass. Regiment, the second unit of colored troops formed by the Union Army but ultimately the most famous all-black infantry unit to fight in the Civil War, as seen in the film GLORY. After Shaw was killed at the Battle of Fort Wagner, Massachusetts Governor John A. Andrew recommended that Rev. Samuel Harrison serve as Chaplain to help the unit's morale. Harrison accepted, and was also instrumental in getting equal pay for black soldiers. Harrison's demand that he receive the same pay as white chaplains led Governor Andrew and United States Attorney General Edward Bates to write letters to President Lincoln to end the discriminatory practice of unequal pay among white and black soldiers in the Union army. In June 1864 legislation requiring equal pay for black units, retroactive to January 1864, was passed in the Army appropriations bill. Images of Rev. Samuel Harrison are rare, and online exemplars seem to vary widely. The present example appears to be a much younger version of Rev. Harrison compared to the image of him at age 81 held by the Samuel Harrison House. Here, he also appears to be wearing a chaplain's uniform, indicating this is a wartime or near-wartime image of him. The verso of the photograph has a penciled note reading, "Rev Samuel Harrison 54th Mass." (Inventory #: WRCAM55438)
$2750.00 add to cart or Buy Direct from
William Reese Co. - Americana
Share this item