The physical interpretation of the quantum dynamics 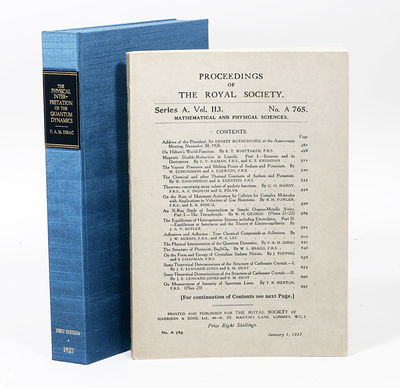 by DIRAC, PAUL
London: The Royal Society, 1927. First edition. original wrappers. Fine. FIRST EDITION IN ORIGINAL WRAPPERS of Dirac's general transformation theory, his own favorite paper and "the pinnacle of Dirac's development of quantum mechanics," unifying "all proposed versions of quantum mechanics, as well as giving rise to a continuum of other possible versions" (Richard Dalitz). After seeing a draft of the present paper, Heisenberg reported to Pauli in a letter of 23 November 1926: "Here we have also thought about the physical meaning of the transformation function, and Dirac has accomplished an extraordinarily far-reaching generalization of this assumption from my note on fluctuation [phenomena]... Dirac's investigations have many points in common with your and my work. Moreover, they are very general, since they apply, e.g., as easily and safely for continuous changes as for those in periodic systems. I consider that Dirac's paper represents an extraordinary progress." Years later, Dirac himself wrote: "I think that [the present paper] is the piece of work which has most pleased me of all the works that I've done in my life... The transformation theory (became) my darling... I just couldn't face giving up the transformation theory [for anything]" (Mehra & Rechenberg, The Historical Development of Quantum Theory). Dirac's paper also provided a justification of the 'probability interpretation' of quantum mechanics, and anticipated both Heisenberg's uncertainty principle and Bohr's complementarity principle. "In section 7 of his paper, Dirac showed 'that the present method is in agreement with the assumption formerly used that the square of the amplitude of the wave function in certain cases determines a probability'... At the end of his transformation theory paper, Dirac wrote: 'If one describes the state of a system at an arbitrary time by giving numerical values to the coordinates and momenta, one cannot actually set up a one-one correspondence between the values of these coordinates and momenta initially and their values at a subsequent time.' This appears to have been a forecast of what Heisenberg would work out in his fundamental paper of March 1927 [i.e. the uncertainty principle] and what Bohr would discuss generally in terms of 'complementarity' later in autumn of the same year" (Brown, Pippard & Pais, eds., Twentieth Century Physics I). "Thus, in less than two years - Heisenberg submitted his [uncertainty] paper in March 1927 - Dirac's and Heisenberg's combined efforts succeeded in establishing both the mathematical theory and the physical interpretation of quantum mechanics. This theory would be presented and intensively discussed at the Fifth Solvay Conference, held in Brussels in October 1927" (Kursunoglu and Wigner, Paul Adrien Maurice Dirac). Richard Dalitz, "Paul Dirac: a genius in the history of physics". Britannica. IN: Proceedings of the Royal Society, Series A, Vol. 113, No. 765, January 1, 1927, pp. 621-641. London: The Royal Society, 1927. Octavo, original printed wrappers; custom box. Volume contents gathering laid-in. A FINE COPY. (Inventory #: 2343)
$4,200.00 add to cart or Buy Direct from
Manhattan Rare Book Company
Share this item
Manhattan Rare Book Company
Offered by

An American Exodus: A Record of Human Erosion