Anarchy and Anarchists. A History of the Red Terror and the Social Revolution in America and Europe. Communism, Socialism and Nihilism in Doctrine and Creed. The Chicago Haymarket Conspiracy, and the detection and trial of the Conspirators 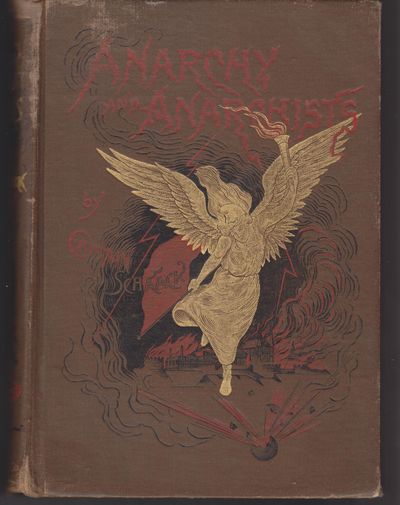 by Schaack, Michael J, Captain of Police
Chicago: F J Schulte & Company. 1889. First Edition; First Printing. Hardcover. Very good+ copy in brown cloth stamped in gilt and red with gold winged figure below the title on the front board, the most elaborate and most often seen binding. Both hinges tight, but wear to front joint and upper left corner of front board; spine a bit worn--more so at tips--but a nice and tight copy with a large rubber stamp on front pastedown from the J. H Cool Mail Order Department, No. 69 Center Ave. Captain Schaacks book was one of several to glorify the victory of law and order over anarchy and violence. Simultaneously, Lucy Parsons and anarchist allies continued to publish their own reports of the arrests, trial and executions, as well as the anarchists speeches in court. As tempers died and facts were reviewed, it began to look like a miscarriage of justice had indeed taken place. One spark that ignited the flame of truth was the revelation that Captain Michael Schaack and several of his henchman had been receiving payoffs from saloonkeepers and prostitutes, stealing from those they arrested and selling the stolen goods. Even the jewelry that one of the anarchists (Lingg) had bequeathed to his girl friend was found in the home of one of Schaacks detectives. An investigation led to Schaack's (and his colleagues) dismissals from the police force. ; Small 4to 9" - 11" tall; 698 pp . (Inventory #: 31046)
$250.00 add to cart Available from Beasley Books
Share this item

The Man Whose Teeth Were All Exactly Alike

Willimanic : Mark V Ziesing , 1984
(click for more details about The Man Whose Teeth Were All Exactly Alike)
View all from this seller>