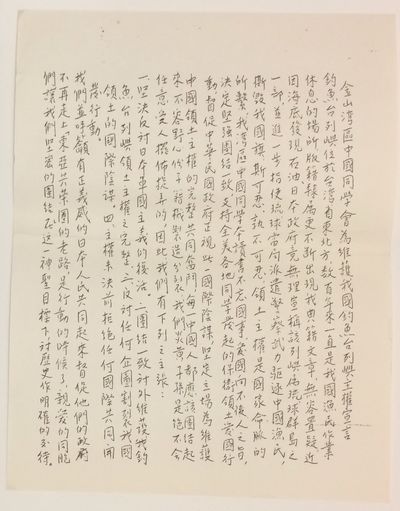 by Jinshan wan qu Zhongguo tongxue hui
[San Francisco Bay Area], 1971. 8.5x11 inch handbill, mimeographed Chinese text, very good. The Diaoyu Tai / Tiao-yu Tai / Senkaku islands are a disputed territory in the sea between Taiwan and Japan, claimed by both China and Japan. In 1971, when the US was preparing to return control of Okinawa to Japan, Chinese and Taiwanese students in the US (and elsewhere) argued that the Diaoyu Tai islands should not be handed back to Japan together with Okinawa; the protesters held that Japan had taken control of the islands as part of its colonization of Taiwan, reversed by the settlement of WW II, and had no prior claim on them. This was one of the few issues that brought together both left-wing and right-wing Chinese in the diaspora at the time. (Inventory #: 249410)
$25.00 add to cart or Buy Direct from Bolerium Books
Share this item