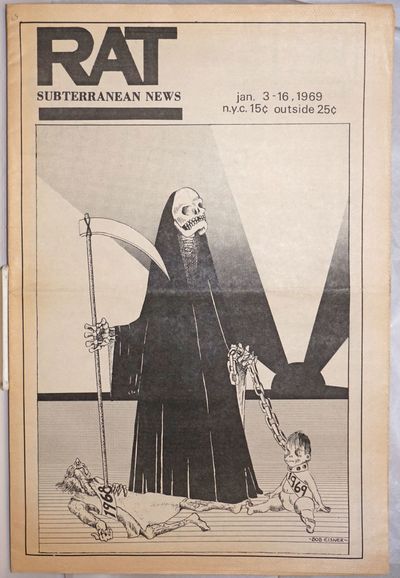 by Shero, Jeff (ed.), Chinese virus(!), Tim Hardin, Bill Graham, et al.
New York: R.A.T. Publications, Inc, 1969. Newspaper. 20p., folded tabloid, illus., lightly toned - mostly along spinefold, else very good. Colophon inside says Vol. 1, No. 21, but date and issues before & after indicate this is #24. Cover art by Bob Eisner depicts the Grim Reaper standing between collapsed old man 1968 and a chained baby 1969. Inside: another Grim Reaper on pg. 3 with caption reading in part, "From a laboratory somewhere in the vast Chinese plain...through the mysterious port of Hong Kong...an insidious microbe has penetrated the very tissue of American life... The Chinese Communist flu has slipped by America's nuclear shiled [sic]. It's in our bodies. With each breath we ourselves are undermining American society." Two-page spread with collage and timeline of UAW/MF's jousting with Bill Graham and the Fillmore East over "FREE nites" for the community; then full-page RAT report on same titled "Is Nonviolence EVER justified?"; also a full page review of bad porn films, a solicitation of funds for Jerry Rubin's indictment for "solicitation to commit mob action" in Chicago, obtained by bugging his phone and apartment; full-page interview with Tim Hardin; finally a column of Rock news by P. Dingle graced with early Joe Schenkman 'toons and photos of Paul Butterfield and Mike Bloomfield. (Inventory #: 249393)
$35.00 add to cart or Buy Direct from Bolerium Books
Share this item