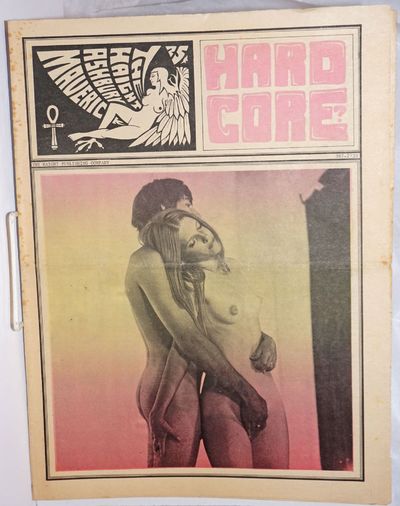 by Strait, Guy (ed.)
San Francisco: Straight and Associates, 1968. Newspaper. 16p., tabloid format newspaper, horizontal fold crease, lightly toned, a bit of foxing along the spine, else very good. Scarce S.F. underground paper edited by Guy Straight, in imitation of the better-known Oracle. Cover sports a softcore porn photo of a young couple and headline "Hard Core?", a question best answered "No". News from SF and nationwide, poetry (full page by Steve Levine, looking like a reprint from the Oracle or an outtake from same), centerspread is color psychedelic art of a buddha riding a dragon, and a full-page ad for Leon Russell and Mark Benno's Asylum Choir. From all appearances, this was a pseudo-underground paper knocked out to sell to tourists during the Summer of Love. Strait also published Cruise News and Citizens News, and organized a gay rights group, The League for Civil Education (LCE). He later became involved in a child pornography scandal and litigation in Illinois. (Inventory #: 249579)
$125.00 add to cart or Buy Direct from Bolerium Books
Share this item