The Haight Ashbury Maverick. Vol. 1 no. 5 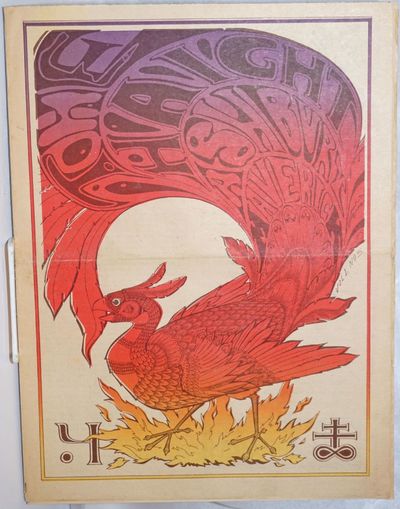 by Strait, Guy (ed.)
San Francisco: Straight and Associates, 1967. 16p., tabloid format newspaper, horizontal fold crease, othrwise very good. Cover art by R. Adams depicting a split-fount colored peacock standing on a bed of fire. Back cover sports a zaftig harem girl sitting on a cushion, veiled in a bikini top, with a sphinx pet at her feet. Scarce S.F. underground paper edited by Guy Straight, in the mold of the better-known Oracle. Most notable contents is a 4-page interview in small type with Ron Thelin, co-proprietor of the Psychedelic Shop, as he was about to split the scene for good. Centerspread is a giant split-fount poster of the rose-garlanded skeleton associated with the Grateful Dead. From all appearances, this was a pseudo-underground paper knocked out to sell to tourists during the Summer of Love. Strait also published Cruise News and Citizens News, and organized a gay rights group, The League for Civil Education (LCE). He later became involved in a child pornography scandal and litigation in Illinois. (Inventory #: 249434)
$125.00 add to cart or Buy Direct from Bolerium Books
Share this item