Hudson River and the Hudson River Railroad: with a complete map and wood cut views of the principal objects of interest upon the line 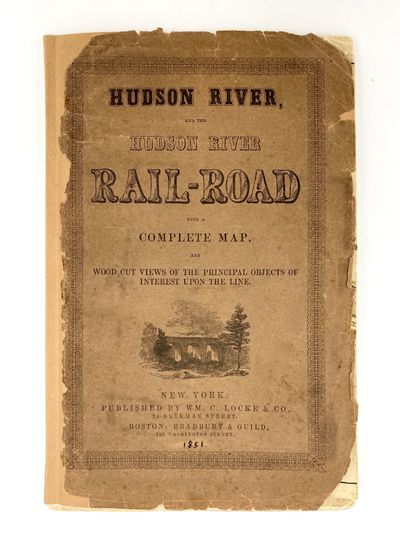 by HUDSON RIVER RAILROAD
New York: Wm. C. Locke & Co, 1851. Wrappers chipped at edges, professionally rebacked, some unobtrusive offsetting on map. 8vo. 50 pages. Large folding map on three joined sheets (21 x 1788 cm; 8.25 x 61.75 inches). 11 woodblock illustrations in text (and with 2 more not recorded in the index but always present). Original printed wrappers with woodblock vignette. SCARCE Hudson River Railroad travel guide published the first year in which the full line was completed. It covers points of interest along the route, with woodblocks illustrating the text. Topics include: the history of the Hudson River, the history of the construction of the Hudson River Railroad, and the cities, towns and villages along the Hudson, from New York City all the way to Troy.  Concerning the West Point Foundry at Cold Spring, the guide states: "the iron foundry [was] established here by Gouverneur Kemble. The works are situated about a mile west of the village, upon a small stream which tumbles rapidly down the mountains, affording considerable water power. It is the largest establishment of its kind in the country, employing nearly five hundred hands constantly." The building of the Hudson River Railroad is another topic in the guide. The project was considered highly impractical, since much of the route had to be cut through extremely difficult rock and terrain. This section includes a description of the tunnels which had to be constructed.  The railroad was opened in three stages. In September 1849, it allowed passengers to travel from New York to Peekskill. By that December 6, twenty-three additional miles were opened, extending to New Hamburg. By the 31st of the month, it was open the remaining distance of nine miles to Poughkeepsie.  The Hudson River Railroad was an extension of the Troy and Greenbush Railroad, which was chartered in 1845, connecting Troy South to Greenbush (now Rensselaer) on the east side of the Hudson. The Hudson River Railroad was chartered on May 12, 1846 to extend this line south to New York City. The full line opened on October 3, 1851, the same year in which this travel guide was published. WorldCat/OCLC records 25 copies, but it is scarcely found complete with the map, and the map is also excluded from the digitized versions available online. (Inventory #: 406078)
$1,500.00 add to cart Available from Riverrun Books
Share this item

St. Louis and the Arch

A Case of Rape

New York : Targ Editions , 1980
(click for more details about A Case of Rape)
View all from this seller>