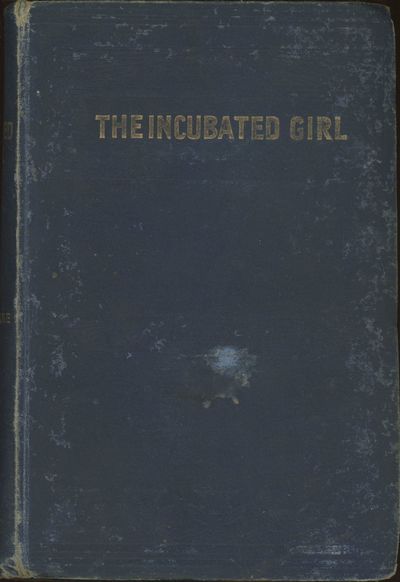 by Jane, Fred[erick] T[homas]
London: Tower Publishing Company Limited, 1896. Octavo, pp. [1-6] 7-347 [348: printer's imprint] [349-352: ads], original decorated navy blue cloth, front and spine panels stamped in gold and blind, all edges untrimmed. First edition, first binding with gold and blind stamping on front cover and Tower's device in gold on spine panel. The second, and scarcest, of Jane's four scientific romances. "An ancient Egyptian papyrus spells out the chemical means whereby an artificial girl can be made; the novel is basically a romance describing the life of the synthetic being who is thus created." - Locke, A Spectrum of Fantasy, p. 122. "...the 'lost science' of ancient Egypt enables a female homunculus to be manufactured. The story is a romance, but the girl does function to some extent as an innocent observer, after the fashion of Wells's angel in THE WONDERFUL VISIT." - Stableford, Scientific Romance in Britain 1890-1950, p. 130. "Overlong, with undeveloped themes and loose ends, but very imaginative and unusual." - Bleiler, Science-Fiction: The Early Years 1178. Clareson, Science Fiction in America, 1870s-1930s 444. Suvin, Victorian Science Fiction in the UK, p. 112. Bleiler (1978), p. 109. Reginald 07834. Cloth worn and spotted, front free endpaper missing, a few pages a bit soiled, a sound reading copy. This book is rarely found in the first binding. In A Spectrum of Fantasy, Locke surmised the existence of the first binding, but had not seen one. (#165813) (Inventory #: 165813)
$75.00 add to cart or Buy Direct from L.W. Currey
Share this item
L.W. Currey Inc.
Offered by