EMPEROR OF THE IF 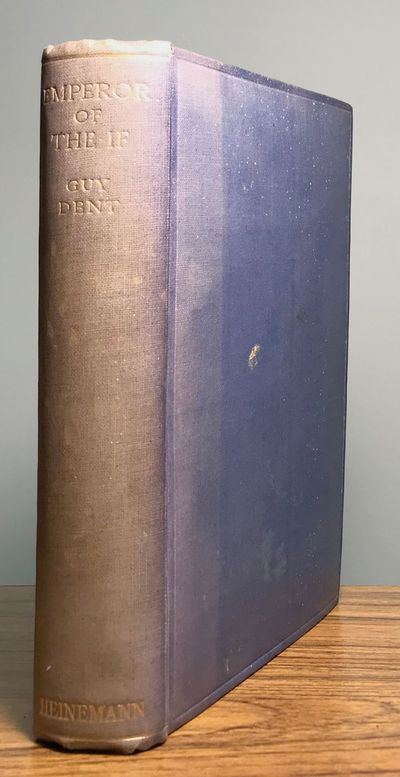 by Dent, Guy
London: William Heinemann Ltd., 1926. Octavo, pp. [1-6] 1-333 [334: blank], original blue cloth, front panel ruled in blind, spine panel stamped in gold, Heinemann windmill stamped in blind on rear panel, all edges trimmed. First edition, first binding. One of the key British science fiction novels in the period between the two world wars. Dent "describes two of the possible universes created by a disembodied brain in a laboratory. In the first part the past is superimposed on the present, with vivid descriptions of London being overrun by prehistoric flora and fauna; in the second the locale is a future dystopia where humans exist under the domination of self-reproducing machines." - Clute and Nicholls (eds), The Encyclopedia of Science Fiction, p. 322. "Although not fully rationalized, this is a powerful and thought-provoking novel, and one of the first to consider history as a developing series of alternatives." - Anatomy of Wonder (1995) 2-30. "... the author's great originality deserves praise." - Bleiler, Science-Fiction: The Early Years 571. "One of the most striking scientific romances of the twenties ..." - Stableford, Scientific Romance in Britain 1890-1950, pp. 266-67. Anatomy of Wonder (1981) 2-21; (1987) 2-30; and (2004) II-320. Clarke, Tale of the Future (1978), p. 53. Locke, A Spectrum of Fantasy, p. 68. Sargent, British and American Utopian Literature, 1516-1985, Additions. Survey of Science Fiction Literature II, pp. 71720. Bleiler, (1978), p. 60. Reginald 04130. Bookplate of F&SF collector William Harry Hopkins affixed to the front paste-down. Spine panel and edges of front and rear panels faded (as is usually the case with this book), small nick to cloth on front cover, text block foxed early and late and at cut edges, a sound, good copy. (#165805) (Inventory #: 165805)
$350.00 add to cart or Buy Direct from L.W. Currey
Share this item
L.W. Currey Inc.
Offered by