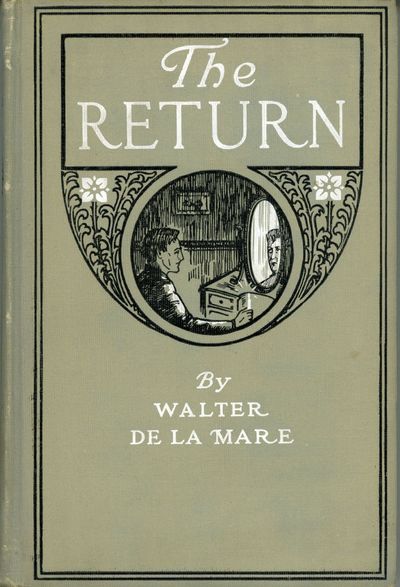 by De la Mare, Walter
New York and London: G. P. Putnam's Sons, 1911. Octavo, pp. [1-2] [i-ii] iii-iv [v-vi] 1-354 [355-360: publishers' ads] [361-364: blank] [note: first and last two leaves are blanks], original pictorial gray cloth, front and spine panels stamped in black and white. First U.S. edition. The author's fourth book and second novel, published in the UK in 1910 "The protagonist goes to sleep in a graveyard and takes on the appearance of an eighteenth-century suicide; rejected by his family and friends he is forced to reconstruct his identity, uncertain whether he must become a psychological as well as a physical replica of the dead man. An unusual exercise in speculative existentialism." - Barron (ed), Horror Literature 3-58. "Most interesting, handled more directly than is usually the case with de la Mare, although much is still left to the reader's imagination." - Bleiler, The Guide to Supernatural Fiction 499. The author revised the text in 1922, toning down the supernaturalism, and that text was the basis of reprints until the recent (1997) Dover reissue, which utilized the text of the present first edition. Ashley, Who's Who in Horror and Fantasy Fiction, pp. 65-6. Sullivan (ed), The Penguin Encyclopedia of Horror and the Supernatural, pp. 117-21. Tymn (ed), Horror Literature 4-89. Wilson, Shadows in the Attic, p. 177. In 333. Bleiler (1978), p. 59. Reginald 04032. Former owner's bookplate affixed to front free endpaper. Perishable white stamping on spine panel a bit dull but intact, partial cracks along inner hinges which are still holding tight, a very good copy. (#165831) (Inventory #: 165831)
$100.00 add to cart or Buy Direct from L.W. Currey
Share this item
L.W. Currey Inc.
Offered by

THE WORKS OF LAURENCE STERNE

Stratford-upon-Avon : Printed at the Shakespeare Head Press , 1926
(click for more details about THE WORKS OF LAURENCE STERNE)
View all from this seller>