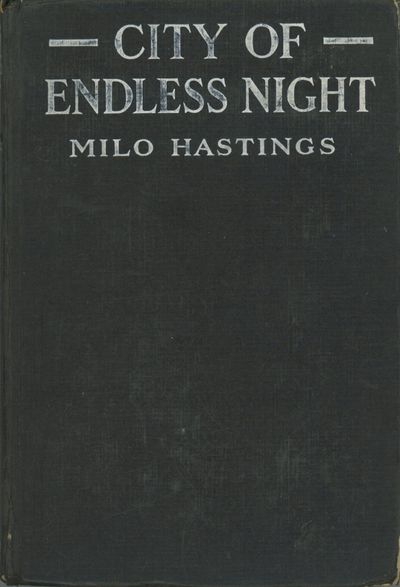 by Hastings, Milo [Milton]
New York: Dodd, 1920. Octavo, pp. [1-6] 1-346, original black boards, front and spine panels stamped in white. First edition. A dystopian tale of the future set in the twenty-second century, a hundred years after Germany has been defeated but not conquered during World War II. Under siege in the huge, fortified, largely subterranean city of Berlin, where a careful eugenics program breeds different classes to continue the war against the world community, the Germans repel attacks by the "World State" with a destructive but limited range ray which annihilates those who attempt to penetrate the city. "The strongest part of the book ... is the author's detailed extrapolation of German culture on the basis of his own day, and his good understanding of political underground movements. The concepts are those of the Nazi state of the 1930s, even to the ravings about racial purity and superior races." - Bleiler, Science-Fiction: The Early Years 1061. The author's obsessions with physical fitness and eugenics tie in with his editorial association with Bernarr McFadden, editor of the magazine, PHYSICAL CULTURE (which also published a good deal of science fiction, including a piece by Hastings). Anatomy of Wonder (1976) 2-91 and (2004) II-504. Bleiler, Science-Fiction: The Early Years 1061. Clareson, Science Fiction in America, 1870s-1930s 405. Locke, A Spectrum of Fantasy, p. 107. Sargent, British and American Utopian Literature, 1516-1985, p. 164. In 333. Bleiler (1978), p. 95. Reginald 06902. Smith, American Fiction, 1901-1925 H-357. Owner's name on front free endpaper. Boards worn at spine ends and corners, a sound, good copy. (#165827) (Inventory #: 165827)
$100.00 add to cart or Buy Direct from L.W. Currey
Share this item
L.W. Currey Inc.
Offered by