ILLUSTRATED MEMOIR OF AN EVENTFUL EXPEDITION INTO CENTRAL AMERICA; RESULTING IN THE DISCOVERY OF THE IDOLATROUS CITY OF IXIMAYA, IN AN UNEXPLORED REGION; AND THE POSSESSION OF TWO REMARKABLE AZTEC CHILDREN, DESCENDANTS AND SPECIMENS OF THE SACERDOTAL CAST [sic], (NOW NEARLY EXTINCT), OF THE ANCIENT AZTEC FOUNDERS OF THE RUINED TEMPLES OF THAT COUNTRY, DESCRIBED BY JOHN L. STEPHENS, ESQ., AND OTHER TRAVELLERS. Translated from the Spanish of Pedro Velasquez, of San Salvador [pseudonym] 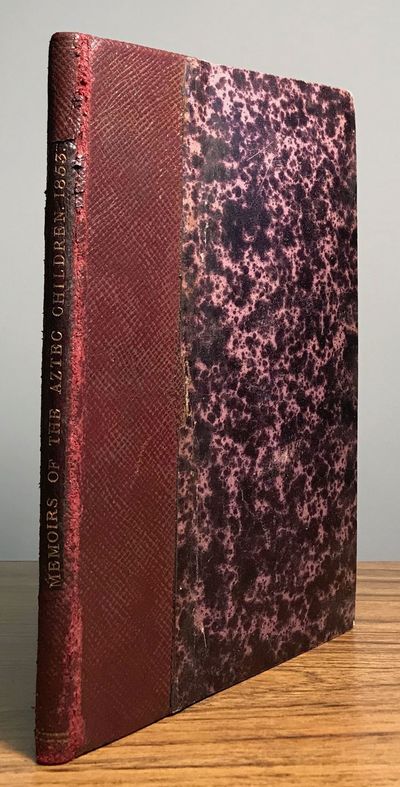 by Velasquez, Pedro (pseudonym)
London: Printed by C. Paul, 1853. Small octavo, pp. [1-4] [i-v] vi-viii, [1] 2-38, 6 inserted plates, other illustrations in the text, quarter diced brown calf and marbled boards with original cream pictorial wrappers printed in red bound in. Possible first British edition. Published earlier in the U.S. as MEMOIR OF AN EVENTFUL EXPEDITION INTO CENTRAL AMERICA ... in several editions in 1850. There were several undated editions published in London, priority not known. A completely fictitious narrative, which can be considered a "lost race" novelette, of an expedition commencing in 1849 into an unexplored region of Guatemala, and the discovery of a lost Aztec city and its inhabitants, supposedly descended from ancient Assyrians, and the subsequent introduction of two of its Lilliputian members to the civilized world. Details of the journey are provided by the diary entries of Senor Pedro Velaquez of San Salvador, described as "a man of family and education, although a trader in indigo." The supposed "Memoir" was a hoax inspired by strong public interest in the trips to Central America by John L. Stephens ("the American traveler") in 1839 and 1841. The two mixed blood "Aztec children," enslaved near San Miguel, were exhibited at circus sideshows in America and Europe. See Sabin 98812 for a detailed note. Bleiler, Science-Fiction: The Early Years 2227. Locke, A Spectrum of Fantasy, p. 218. Teitler and Locke, By the wold Forgot (2013) 1228. Reginald 14593. Not in Bleiler (1948; 1978). Bookplate of Stuart Teitler affixed to the front paste-down. A very good copy. (#165812) (Inventory #: 165812)
$250.00 add to cart or Buy Direct from L.W. Currey
Share this item
L.W. Currey Inc.
Offered by

New York : White , 1883
(click for more details about A DAUGHTER OF THE GODS OR HOW SHE CAME INTO HER KINGDOM: A ROMANCE by Charles M. Clay [pseudonym] ..)

New York : Ralph S. Mighill , 1899
(click for more details about MONTEZUMA'S CASTLE AND OTHER WEIRD TALES ... Author's Edition)
View all from this seller>