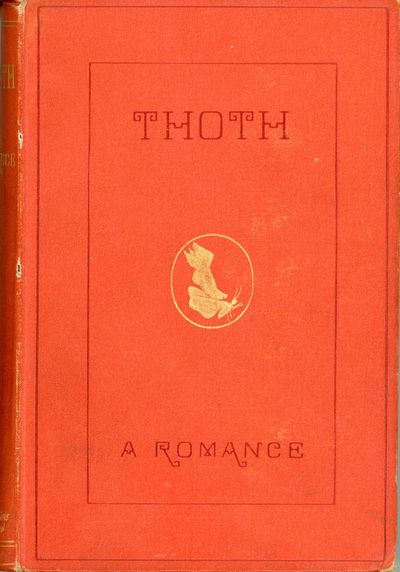 by [Nicholson, Joseph Shield.]
Edinburgh and London: William Blackwood and Sons, 1889. Octavo, pp. [1-2] [i-v] vi-viii [ix] x [1] 2-228 + 24-page publisher's catalogue dated "8/88" on page 24 inserted at rear, original decorated reddish orange cloth, front panel stamped in gold and brown, spine panel stamped in gold, top and fore edges untrimmed, slate coated endpapers. Second edition, enlarged. This edition adds Nicholson's 4-page "Preface to the Second Edition," and "Appendix," pp. [211]-228, latter being "the last chapter of THOTH as originally written in 1876." The first of Nicholson's three anonymously published fantasy novels. "Lost race science fiction story set in the time of ancient Greece in which a superscientific race in the depths of Africa abducts some Grecian maidens and takes them away in an airship." - Locke, A Spectrum of Fantasy, p. 16. "A semi-allegory of love and power, presented in a detached, almost fabular way. Essentially a descendant of Bulwer-Lytton's THE COMING RACE (1871) ... One of the major science-fiction novels of the nineteenth century." - Bleiler, Science-Fiction: The Early Years 1624. Clute and Grant (eds), The Encyclopedia of Fantasy (1997), p. 685. Sargent, British and American Utopian Literature, 1516-1985, p. 79. Suvin, Victorian Science Fiction in the UK, p. 36. Teitler and Locke, By the World Forgot (2013) 46. Bleiler (1978), p. 148. Reginald 10679. Binding leaned, cloth rubbed at spine ends, corner tips lightly worn, two tiny areas of wear to cloth along outer joint, a bit of mild soiling to cloth, a tight, internally clean, very good copy. Overall, a nice copy. The first printing of the second edition is, like the first edition, an uncommon book. An important edition of an important book. (#165799) (Inventory #: 165799)
$350.00 add to cart or Buy Direct from L.W. Currey
Share this item
L.W. Currey Inc.
Offered by