TALES OF THE WONDER CLUB .. 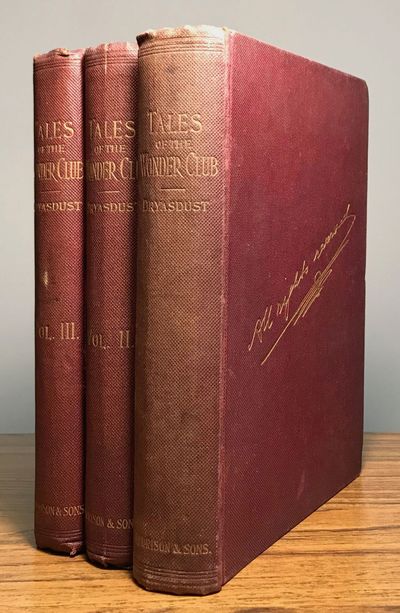 by Dryasdust (pseudonym)
[London]: Harrison & Sons, 1899. Octavo, three volumes: pp. [1-5] 6-401 [402] [403-404: blank]; [1-5] 6-388; [i-v] vi-viii [389] 390-662 [663-664: blank], 23 inserted plates with illustrations by John Jellicoe and Val Prince after designs by the author, original maroon cloth, front panels stamped in gold, spine panels stamped in gold and ruled in blind, white endpapers with floral pattern printed in olive-green, upper edges untrimmed. First edition. "Omnibus collection of 'bloodcurdling' tales with decidedly mid-Victorian flavor, in spite of publication date; set in an old-fashioned frame, too, told 'round the Yule Log at 'Ye Headless Ladye,' a Midlands hostelry of the old coaching days circa 1800, by an informal club of travelers and their hosts. Enlivened by a Dickensean mixture of the cold grue and the grotesquely humorous: like the fat boy, they 'only wants to make your flesh creep.' Notable tales include 'The Phantom Flea' and 'The Spirit Leg' in volume I; 'Execution' and 'The Waxen Image' in volume II; Volume III has no fantasy content being mostly taken up with Gothic melodrama 'The Gipsy Queen.' Literary curiosities which seem to have strayed from an Christmas annual circa 1865 into a triple-decker, probably self-published by the author. Binding, design, and illustrations are archaic for 1899." - Robert Knowlton. Ashley, Who's Who in Horror and Fantasy Fiction, p. 87. Barron (ed), Fantasy Literature 2-50. Bleiler, The Guide to Supernatural Fiction 565. Locke, A Spectrum of Fantasy, p. 72. Bleiler (1978), p. 64. Reginald 06648 and 06649. Slight lean to volume one which also has a bit of fade to spine panel and partial hairline cracks along inner hinges; volumes two and three are very nice copies with clean bindings and tight inner hinges. (#165819) (Inventory #: 165819)
$500.00 add to cart or Buy Direct from L.W. Currey
Share this item
L.W. Currey Inc.
Offered by