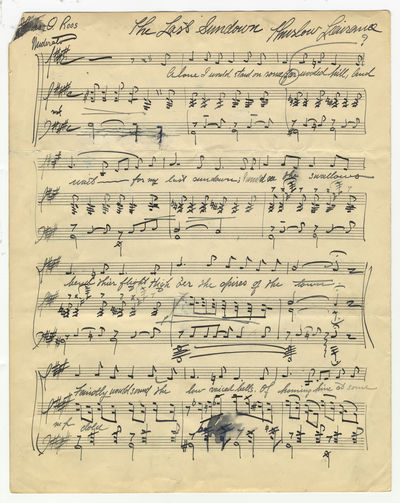 signed
by LIEURANCE, Thurlow 1878-1963
Folio, 342 x 273 mm. Unbound. [1] (autograph title], [2]-[4] (autograph musicand text). 33 measures. Notated on 2 leaves of a bifolium in black ink on 12-stave Carl Fischer music paper. With autograph title and signature to head of first page. Marked "Moderato." With autograph markings and corrections in blue and lead pencil. With text commecing: "Alone I would stand on some far wooded hill, and wait for my last sundown." Somewhat worn and browned; minor staining; creased at folds and overall; some smudging to ink and blue pencilling. Published by Theodore Presser in ca. 1936. An American composer, Lieurance became fascinated by the music of Amerindians following a visit to the Crow Reservation in Montana in 1903. "He made many attempts to obtain a position with the US government for the purpose of collecting Amerindian music but his offers were consistently declined, though he may have worked as a collector with the Wanamaker expedition of 1908. His first field recordings date from 1911; the results of this and subsequent trips comprise a large and important collection of Amerindian music now in the Archive of Folk Culture at the Library of Congress. Between 1917 and 1926 he led a touring group on the Chautauqua circuit which presented his arrangements of Amerindian melodies ... [Lieurance] was one of several composers who attempted to develop an indigenous American music based on Amerindian materials ... His best-known work, the song By the Waters of Minnetonka (also known as Moon Deer), has enjoyed widespread and enduring popularity." Douglas A. Lee in Grove Music Online. (Inventory #: 33386)
$1320.00 add to cart or Buy Direct from
J. & J. Lubrano Music Antiquarians
Share this item

Halifax, New York : The Press of the Nova Scotia College of Art and Design, New York University Press , 1974
(click for more details about Writings about Music)

New York : Two-Eighteen Press , 1974
(click for more details about Imaginary Music)
View all from this seller>