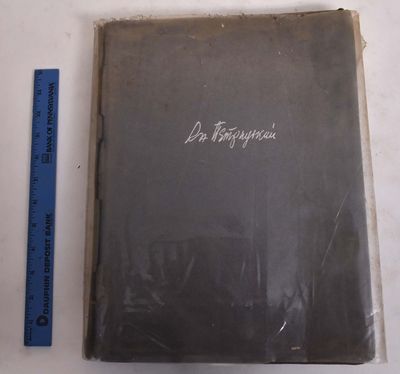 by Chmury, B. (text) and Anatol Petrizky (art)
Staatsverlag der Ukraine, 1929. Spine paper broken along entire front outer hinge; dampstain on upper right corner of front cover apparent, and this is very lightly visible on some but not all of the text sheets, as well. There is no ill effect to the mounted plates. Overall a solid and attractive copy of a very rare title, whose spine can be easily restored.. Greyish paper-covered boards and spine with gilt title in center, no title on spine. 29 mounted color plates including frontis and 28 mounted bw plates, with tissue guards between the plates, additional 15 bw photographs within the text. Text in Ukrainian (Cyrillic) and German./ Added t.p. in Ukrainian./ At head of title: Anatol Petrizky. One of 1200 unnumbered copies. Plates by Anatol Petrizky, text by B. Chmury. Contents as follows: Exzentrischer Tanz staged by K. Goleisovsky (4 plates); Präludium von Skrjabin by L. Lukin (1 plate); the ballet Nur und Anitra by M. Mordkin (4 plates); the comedy "Wij," Herr Chorunschij by H. Jura (10 plates, including frontis); the operas Der Jahrmarkt von Ssorotschinzi (7 plates), Wilhelm Tell (6 plates), and Fürst Igor (8 plates) and the ballets Der rote Mohn (5 plates) and Der Korsar (8 plates) by the Staatsoper. Charkiw; the opera Turandott by Lui Laber (4 plates) for a total of 57. 27 full-page mounted color lithographs of Petrizky's Russian avant-garde stage and costume designs for theater, ballet, and opera, tipped to captioned mounts. Classic and important Constructivist stage design. (Inventory #: 176367)
$3,950.00 add to cart or Buy Direct from Mullen Books
Share this item