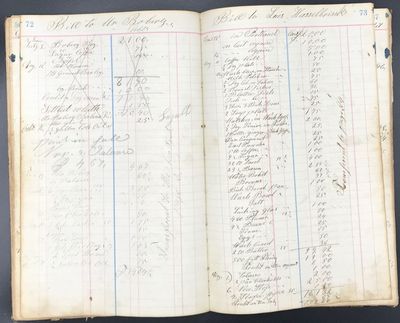 by [Wilson, Charles]
1883. Two volumes, 31 cm., a total of approx. 270 pages. Stationer's lined account books, leather spines and corners, marbled paper boards (rubbed and worn). Hinges cracked, a few pages loose, a few torn. Entries in ink and pencil, occasionally in a hurried hand, with some unusual spellings of common items [choes, for shoes; oberhohles, for overalls; wisky, for whiskey, etc.]. Alphabetical index tabs in the front of one volume. Cabinet photo of an unidentified man with a beard, printed by Imperial, Portland, Oregon, laid in.
These account books belonged to Charles Wilson (c.1830-1905), an immigrant from Germany. The area in Clackamas County where he settled was on the Willamette River, near the ferry founded by Alphonso Boone, grandson of Daniel Boone. Originally called Boone's Landing, it was renamed Wilsonville in 1880, for Charles Wilson, the first postmaster. According to the 1880 Census records, Wilson was also a "retail grocer" in Clackamas County, in the area referred to as "Pleasant Hill."
Wilson supplied many locals with goods and groceries, including Bishop Seeley, Moses Farmer, Ulrich Wagner, Heinrich Chutt, Martin Blanken, Luis Hasselbrink, Robert Zumwalt, etc., many names representative of the Germans who had immigrated to the Oregon territory. He mentions provisioning Justices of the Peace George Day and Tom Riggs, plus a Mr. [Reuben?] Streeter 'from across the river,' Mr. Chaefer [Schaefer?] the 'sawmill man,' a hardware store in Portland, and Mr. Bell, of John Boys [?] & Company. On Jan. 1, 1881, a note on the account page for R. V. Chort [Short] says all accounts up to that date between Short and Wilson have been settled, and each affixes his signature. [Robert Valentine Short was a politician, member of the Oregon Constitutional Convention, and land surveyor]. At the rear of both books, mention is made that Wilson was supplying cords of wood to some of the steamers plying the Willamette River, including the 'Willamette Steamer,' the 'Orient,' and a handful of others, though the spelling of their names is a bit unclear: Bonansy [or Bonanry?], Ossident [?], Quensey [?]. A brief history by the Wilsonville Chamber of Commerce mentions the town's position on the Willamette River where its ferry operations provided a "critical link for trade and commerce between Portland and the Willamette Valley. The town became a bustling port where huge steamers docked with passengers, merchandise and farm crops, transporting them up and down the busy Willamette waterway...." Charles Wilson, as a founder of the town and merchant was in a unique position to take advantage of this commerce, as these two early account books show. (Inventory #: 64691)
$750.00 add to cart or Buy Direct from
Bartleby's Books
Share this item