Regulations to be Observed by all Persons Employed by the Proprietors of the Stark Mills. Signed in print by Phinehas Adams, Agent 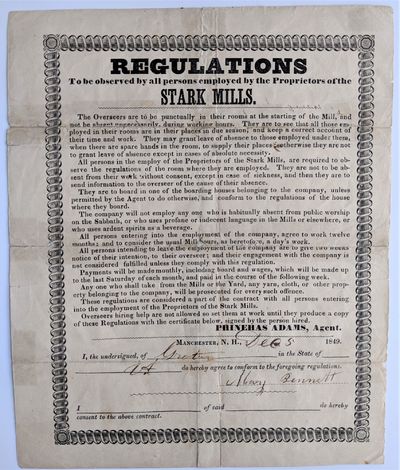 by (Stark Mills)
Manchester, New Hampshire, 1849. Broadside. 8vo. 215 x 175 mm., [8 ½ x 7 inches]. Text enclosed within a decorative typographical border. Folded with previous repairs to folds, small hole at center fold. Dated December 5, 1849 and signed Mary Bennet. The broadside records the rules which every person must sign before employment commences and includes details about hours of work and requirements about absenteeism, alcohol use, and use of profane language. Each mill worker would live in the company boarding houses unless excused by the Overseer. The broadside contains information about monthly wages, but no specific information is supplied. It is also emphatic that theft of yarn, cloth, or other properties of the company would be prosecuted "for every such offence." Stark Mills was an affiliate of Amoskeag Manufacturing Company, which was to become the largest and most important textile manufacturer during the 19th century. Stark Mills was at the center of the development of Manchester as a leading city in New Hampshire and was resident to Building Number 1, the centerpiece at the time, of a complex of plants that made up Manchester's manufacturing zone. The zone included housing, schools and company stores where employees lived and raised their families. The goal of the city fathers was to build a Utopian city where employees could live and work in a secure environment. This type of benevolent management included employee access to schools, churches, medical care, parks, and fire stations and libraries. One wonders how this Utopian scheme played out for Mary Bennett, mill worker for Stark Mills Manchester. (Inventory #: 474)
$650.00 add to cart Available from
De Simone Company
Share this item
De Simone Company, Booksellers
Offered by