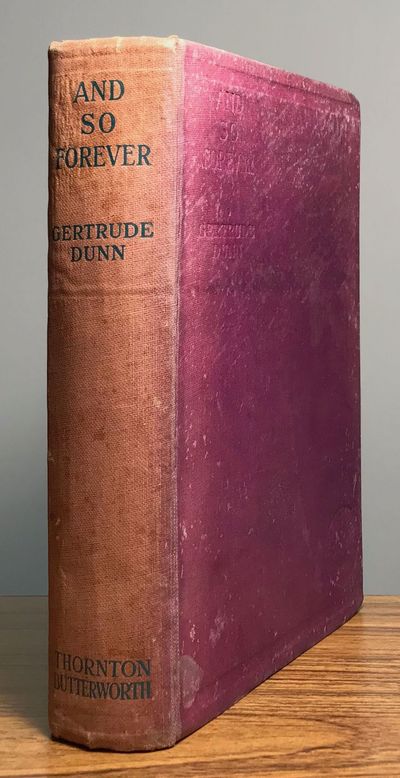 by Dunn, Gertrude
London: Thornton Butterworth, 1929. Octavo, pp. [1-10] 11-285 [286] [287: blank] [288: ads] [note: first leaf is a blank], original purple cloth, spine panel stamped in black. First edition. Supernatural romance of witchcraft and immortality by mysterious elixir. "A beautiful but solitary woman attracts interest and suspicion with hints that she is much older than she seems. When she sits down to her old spinet, 'A thin sweet melody trickled out over the shadows. It seemed to emanate from them -- to be made up of unsubstantial, phantom things -- dead things.' She is kindly, full of odd home remedies to help the village poor or to hinder moths from molesting her ancient gowns. She accepts the reality of witchcraft and correctly diagnoses a contemporary appearance of it. Her diary makes an appearance in a closing chapter and explains the mystery. Born in 1684, she purchased an elixir vitae from an apothecary in 1713. She has long since rued her vanity but will accept her fate with patience. The writing is competent but no more than that." - Robert Eldridge. Dunn published a scarce vampire novel THE MARK OF THE BAT (1928), and UNHOLY DEPTHS, a ghost story. She should not be confused with another writer named Gertrude Dunn who wrote as Mrs. Bailie-Weaver, Gertrude Renton Weaver and G. Colmore, and who produced the occult fantasy A BROTHER OF THE SHADOW under her Colmore name. Locke, A Spectrum of Fantasy, p. 73. Reginald 04591. Not in Bleiler (1948; 1978). Day, The Supplemental Checklist of Fantastic Literature, p. 27. Clute and Grant (eds), The Encyclopedia of Fantasy (1997), p. 302. Damp stains on front and rear covers, spine panel faded, scattered foxing, heavy on the front free endpaper, a good copy. (#165835) (Inventory #: 165835)
$100.00 add to cart or Buy Direct from L.W. Currey
Share this item
L.W. Currey Inc.
Offered by