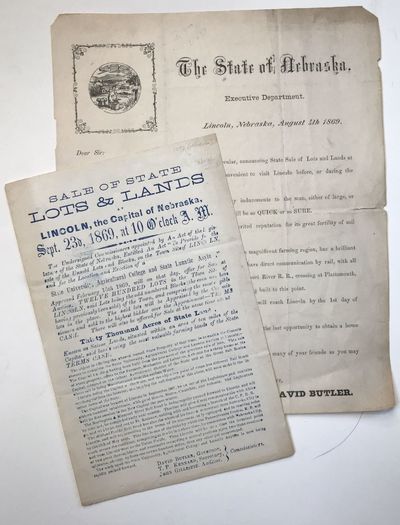 by [Nebraska]
[Lincoln, Ne, 1869. Good.. Two small broadsides. One previously folded, with minor wear at edges and closed tear along horizontal fold line. Light tanning and dust soiling. Two pieces of interesting promotion for land sales in and around the new state captial of Nebraska, Lincoln, in 1869. Nebraska became a state in 1867, and the capital was moved from Omaha to the more centrally located town of Lancaster, which was renamed Lincoln. The first piece is a flyer that advertises the sale taking place on September 23rd of:

"Twelve Hundred Lots in the Town Site of Lincoln, said lots being being the odd numbered Blocks (the even number shaving previously been sold) of the Town, and comprising the most eligible lots in the place. The said lots will be Appraised by the Commissioners and sold to the highest bidder over the aprraisement -- TERMS CASH. There will also be offered for Sale at the same time about Thirty Thousand Acres of State Land, Known as Saline Lands, situated within an area of ten miles of the Capital, said lands being the most valuable famming lands of the State."

The state legislative act authorizing the sale mandated that the funds be used first for a state university, agricultural college, and lunatic asylum. The flyer is accompanied by a printed letter from David Butler, the first governor of the state, drawing attention the sale, with the usual blandishments about the fertility of the soil and profitability of the investments, also stating that, "This will probably be the last public sale of State Property, and opportunity to obtain a home (at low figures) at the State Capital. In view of these, and other facts, I am desirous that you, with so many of your friends as you may induce to come with you, should be present on the day of the sale."

Good documentation of the establishment and expansion of Lincoln. (Inventory #: 1092)
$475.00 add to cart or Buy Direct from
McBride Rare Books
Share this item