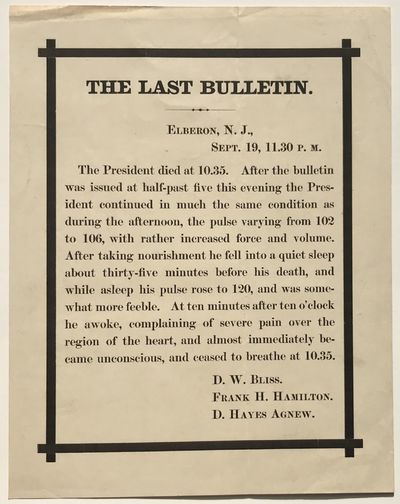 by [Garfield, James]
Elberon, N.J., 1881. Very good.. Broadside, 9 x 7 inches. Minor wear and toning. Broadside announcing the death of President James Garfield. Datelined at Elberon, where the President spent his final months, the broadside gives time of death and is signed in type by Garfield's doctors. It reads, in part: "The President died at 10.35. ... After taking nourishment he fell into a quiet sleep about thirty-five minutes before his death...he awoke, complaining of severe pain over the region of the heart, and almost immediately became unconscious, and ceased to breathe at 10.35." Shot by Charles Guiteau on July 2, 1881, Garfield's doctors eventually killed him by sepsis, repeatedly digging in his wound in search of the bullet. A handsome announcement of this tragic event. (Inventory #: 1066)
$350.00 add to cart Available from
McBride Rare Books
Share this item