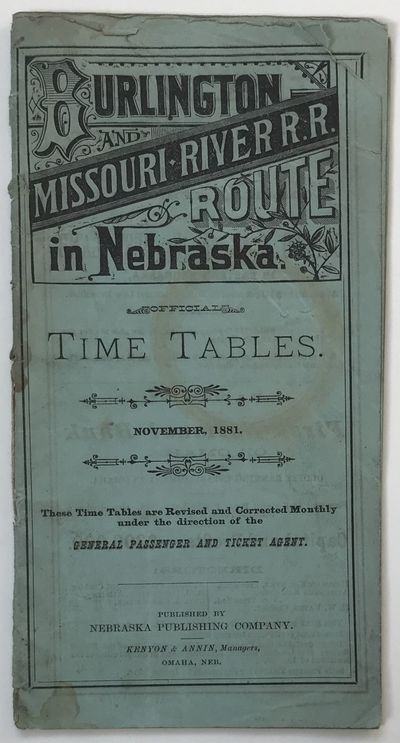 by [Nebraska]. [Railroads]
Omaha: Nebraska Publishing Company, 1881. Good plus.. 32pp., including self wrappers. Stitched, as issued. Some wear at spine and edges; light damstaining to wraps, continuing internally at gutter and lower edge. Scarce time table for Burlington and Missouri River Railroad lines through Nebraska for the month of November 1881. This pamphlet includes schedules for the main line, which ran from Omaha and Plattsmouth to Red Cloud, and branches to Atchison, Kansas, and Columbus from Lincoln; to Culbertson and Crete from Red Cloud; to Nebraska City and Kearney from Hastings. The central pair of leaves contains a small map of the system in the state, and describes various connections to the lines of other companies. With numerous illustrated advertisements for Omaha businesses and a full-page advertisement for Burlington and Missouri River Railroad grant lands. A good encapsulation of the railroad's operations in Nebraska during the early 1880s. (Inventory #: 1020)
$450.00 add to cart or Buy Direct from
McBride Rare Books
Share this item