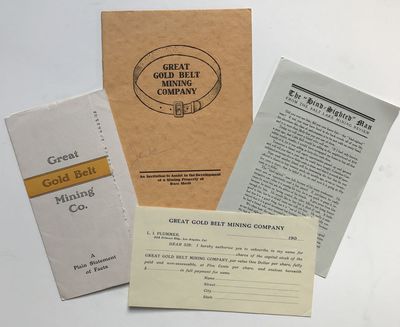 by [California]. [Mining]
Chicago: Hollister Brothers, 1906. Very good.. 12pp., plus two small folding pamphlets and response card. Original printed wrappers, stapled. Light wear to wraps. Scarce, illustrated promotional material for the early 20th-century mining claims of the Great Gold Belt Mining Company in San Bernardino County that extend "an invitation to assist in the development of a mining property of rare merit." Great Gold Belt was headquartered in Los Angeles and Cleveland, Ohio. The pamphlet is illustrated with several maps and photographic reproductions of the claims; the text provides the usual information about the ore already discovered, development plans, and costs of investment, and touts the proximity of the claims to proven mines in southwestern Nevada. Two smaller folding pamphlets provide an encapsulation of facts concerning the project, and several ominous testimonials about missed opportunities, and a subscription response card is also included. A nice group, quite attractively produced. Not in OCLC. (Inventory #: 957)
$250.00 add to cart or Buy Direct from
McBride Rare Books
Share this item

[Archive of Original Letters and True Copies of Documents Pertaining to the Capture of the U.S.S. Independence on Suspicion of Its Continued Involvement with the International Slave Trade]

[N.p., but most likely Birmingham, Al.] 1899
(click for more details about [Manuscript Account Book Kept by J.C. Barker of Mixon, McAlpine & Company, a Late-19th Century African-American-Owned Bookstore and Job Printing Company in Alabama])
View all from this seller>