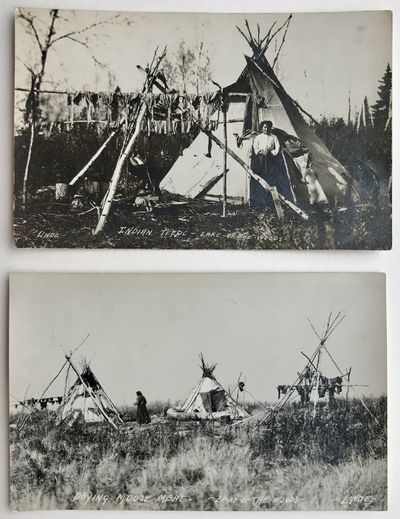 by [Canada]. Linde, Carl Gustave
[Lake of the Woods, 1912. Very good.. Two real photo postcards. Minor wear and soiling; one with pencil notes and stamp on verso. Two handsome photo postcards by Canadian photographer Carl Gustave Linde. Linde, born in Massachusetts in 1882, set up a photo studio in Kenora, Ontario, situated on the northern edge of Lake of the Woods, just north of the border with Minnesota. He spent many years documenting the area and its inhabitants. The two images offered here are of Ojibwe Indians. The first is titled "Indian Teepe - Lake of the Woods" and shoes a smiling woman standing in the doorway of her teepee; her hair is pulled back, she wears a white blouse and a dark skirt, and her hands are folded at her waist. A drying rack made of birch poles and draped with meat of some kind is situated in the left foreground. The second image is titled "Drying Moose Meat - Lake of the Woods" and shows two teepees in the middle distance, a woman walking between the two of them with her back to the camera. Racks draped with meat flank the teepees on either side; a canoe can be seen in front of one of the dwellings. There is an excellent collection of Linde's work at the Lake of the Woods Museum, though we are unable to find much elsewhere. A striking pair of images from the border area of Ontario. (Inventory #: 1351)
$200.00 add to cart Available from
McBride Rare Books
Share this item