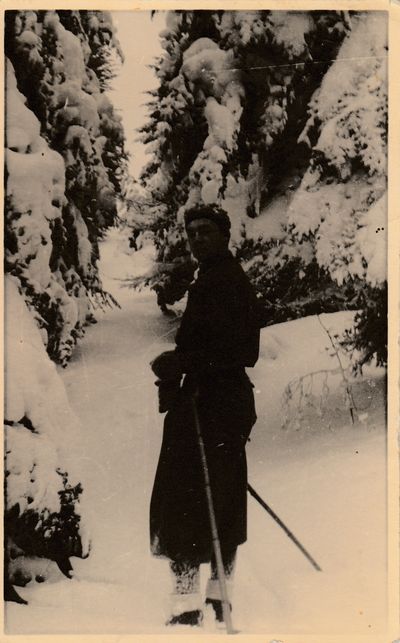 by Stroi&#324;ski, Leon Zdzis&#322;aw (Marek Chmura, pseud.)
Leon Zdzisław Stroiński (1921-1944) was a poet and a resistance soldier in Armia Krajowa (Polish Home Army) during WWII. Born in Warsaw in 1921, he belonged to the "doomed generation" of poets, referred to as the Generation of Columbuses, many of whom died in their early 20s during WWII. The outbreak of the war foiled Stroiński's plans to study law in Lublin, and he began to study Polish philology at a clandestine University in occupied Warsaw instead. He also graduated from an underground cadet school in this period. Active in the Polish underground press during the occupation, he published his work in the literary journal Sztuka i Naród starting in 1942. In his collection of prose poems "Okno" (1943), published under the pseudonym Marek Chmura (which was also his resistance army name), he created vivid images of life under occupation, with messianic undertones. In 1943 he was arrested by the SS for laying a wreath on the monument of Nicholas Copernicus on the 400th anniversary of the scientist's death (along with his friends, the poets Tadeusz Gajcy and Wacław Bojarski). Stroiński was eventually released, managing to convince the investigators that he was not from Warsaw and had nothing to do with the forbidden patriotic act. According to the Museum of the Warsaw Uprising he was killed on August 16, 1944. Contents 1) Photograph of Zdzisław Stroiński dated 1942, two years prior to his death in the Warsaw uprising. The photo was never published. 2) A typescript letter from Stanisława Stroińska (mother of the poet) to Stanisław Marczak-Oborski dated August 1946. Stroińska explains that she is desperately looking for proof that her son was killed during the Warsaw uprising. She mentions that Tadeusz Gajcy (another poet and Home Army soldier), whose body was found in the rubble, was with Stroiński on the day of his death. Stroińska also asks what unit of the Home Army her son belonged to and enquires about his possible post mortem promotion. 3) Envelope of letter of Stanisława Stroińska to Stanisław Marczak-Oborski. 4) A typescript letter from Stanisława Stroińska (mother of the poet) to Natalia Bojarska (born Halina Natalia Marczak, sister of Stanisław Marczak-Oborski), dated January 1947. In the letter, Stroińska asks Bojarska about copies of her son's books which she would like to purchase. Halina Natalia Marczak married Wacław Bojarski, one of the editors of the underground literary journal Sztuka i Naród, in 1943 when he was on his deathbed. Natalia Bojarska was a nurse for the Home Army and took part in the Warsaw uprising. 5) Envelope of letter from Stanisława Stroińska to Natalia Bojarska. 6) List of works written by Leon Zdisław Stroiński, type-written by his mother. On the back of the document is a hand-written description of a necklace that he was likely wearing when he died. 7) Hand-written letter from Stanisława Stroińska to Natalia Bojarska, about the possibility of visiting the place where her son was killed. Stroińska also mentions that she gave all the material about her son to Roman Bratny, another poet and writer connected with Sztuka i Naród and one of the best known wartime poets. Provenance: personal archive of Stanisław Marczak-Oborski, after his death in 1987 in the collection of Polish historian Pawel Wieczorkiewicz (1948-2009). (Inventory #: 50324)
$1750.00 add to cart or Buy Direct from
Bernett Penka Rare Books
Share this item


(click for more details about Gersaint&#367;v &scaron;tít [Signboard for Gersaint])
View all from this seller>