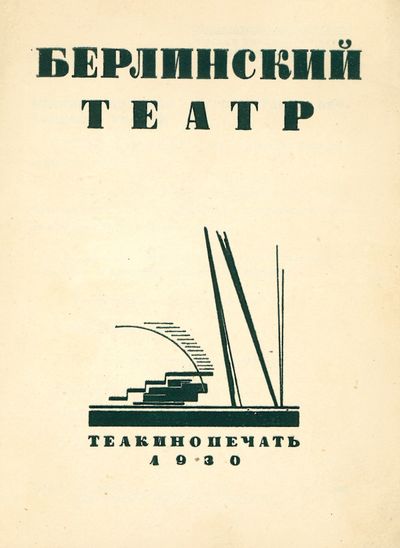 by Gruppe Junger Schauspieler
Moscow: Teakinopechat', 1930. Small octavo (14.5 Ã— 11 cm). Original staple-stitched printed wrappers; 16 pp. Very good. First and only edition of a rare brochure documenting the Moscow tour of the Berlin-based "Gruppe Junger Schauspieler" (Group of Young Actors), founded in 1928 by Gerhard Bienert, Reinhold Bernt, Werner Pledath, Adolf Fischer and others, which toured widely and performed largely socially critical and leftist works. Such forms of international exchange were facilitated by VOKS (Vsesoiuznoe obshchestvo kul'turnoi sviazi s zagranitsei) and Mezrabpom (International Workers' Aid). The program contains lists of protagonists, the German actors involved, as well as synopses of the works. These included "Revolt at the orphanage" (Revolte im Erziehungshaus) by Peter Lampel and the abortion-themed "Cyankali" by Friedrich Wolf, originally performed in 1929 to great acclaim. Laid in is a blank soliciting viewers' responses about the artistic and political success of the plays, meant to be filled out and deposited into a box prior to leaving the theatre. A very interesting and scarce memento of the influence of Weimar Republic German theatre on Soviet audiences. As of April 2020, no copies found via KVK, OCLC. (Inventory #: 50375)
$750.00 add to cart or Buy Direct from
Bernett Penka Rare Books
Share this item