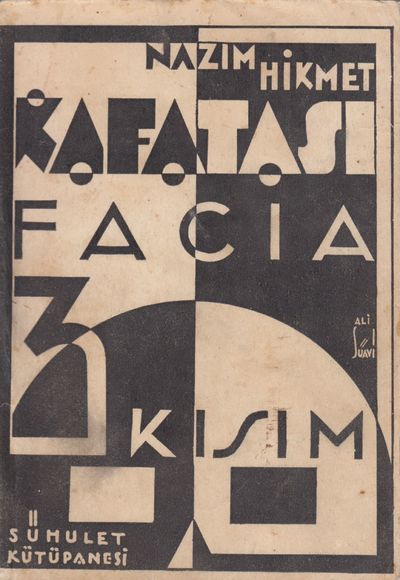 by Hikmet, Nazim (1902-1963) and Ali Suavi (Suavi Sonar, 1910 or 1913-1994), designer
Istanbul: Orhaniye Matbaasi, 1932. Octavo. Original pictorial wrappers by Ali Suavi; 103 pp and [9] pp. of advertisements. Very light wear and discoloration to wrapper edges; signature to title page; overall about very good. First edition of the play "The Scull" by Hikmet. With a striking cover designed by Ali Suavi (1910 or 1913-1994), who Suavi designed most of the avant-garde-inflected covers of Hikmet's books. Little is known about Suavi, who was a famous designer of books and later became known as a photographer. Nazim Hikmet (1902-1963) is considered the founder of modern Turkish poetry, who transcended Ottoman versification and absorbed the influence of Russian futurist writers such as Sergei Esenin, but above all Vladimir Mayakovsky. Aside from the "step-ladder" form of verse, he shared with Mayakovsky his sociopolitical engagement, as well as Esenin's love for the simple folk and his origins. Impressed by the 1917 October Revolution in Russia, he resisted the occupying powers in Constantinple and fled to the countryside, where he sought to connect with various socialist and libertarian organizations. In 1920s, he traveled to Russia twice for extended periods of time, where he studied in Moscow and was in close contact with Soviet Futurist poets. Upon his return in 1928 he was subject to imprisonment and harsh repressions, including a ban on publishing, but nevertheless garnered success with readers and created a prolific output while in prison. In 1938 he was sentenced to nearly three decades of jail, but was released in 1950 and fled to Moscow exile in 1951, where he was a leading public intellectual and died in 1963. He was not published in Turkey until 1965 and remained nearly unknown in the West for much longer. See also: Saime Göksu and Edward Timms, Romantic Communist: The Life and Work of Nazim Hikmet.

As of March 2020, KVK and OCLC list four institutional holdings, of which two in North America. (Inventory #: 50664)
$1,750.00 add to cart or Buy Direct from
Bernett Penka Rare Books
Share this item


(click for more details about Hledání neznámých veličin: román [Search for unknown entities: a novel])
View all from this seller>