Commanding the Army of the Potomac 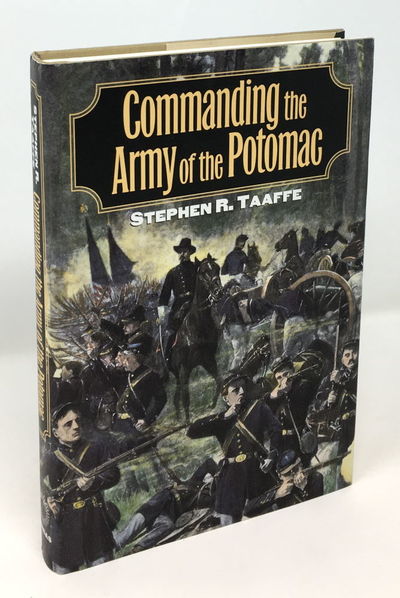 by Taaffe, Stephen R.
Hardcover with dust jacket, tan cloth with white titles, 15.5 by 23.5 cm, ix 284 pp., maps. Hardcover is fine; the jacket has dampstaining at the foot of the spine that has not affected the book itself. From the publisher: "During the Civil War, thirty-six officers in the Army of the Potomac were assigned corps commands of up to 30,000 men. Collectively charged with leading the Union's most significant field army, these leaders proved their courage in countless battlefields from Gettysburg to Antietam to Cold Harbor. Unfortunately, courage alone was not enough. Their often dismal performances played a major role in producing this army's tragic record, one that included more defeats than victories despite its numerical and materiel superiority. Stephen Taaffe takes a close look at this command cadre, examining who was appointed to these positions, why they were appointed, and why so many of them ultimately failed to fulfill their responsibilities. He demonstrates that ambitious officers such as Gouverneur Warren, John Reynolds, and Winfield Scott Hancock employed all the weapons at their disposal, from personal connections to exaggerated accounts of prowess in combat, to claw their way into these important posts. Once there, however, as Taaffe reveals, many of these officers failed to navigate the tricky and ever-changing political currents that swirled around the Army of the Potomac. As a result, only three of them managed to retain their commands for more than a year, and their machinations caused considerable turmoil in the army's high command structure. Taaffe also shows that their ability or inability to get along with generals such as George McClellan, Ambrose Burnside, Joseph Hooker, George Meade, and Ulysses Grant played a big role in their professional destinies. In analyzing the Army of the Potomac's corps commanders as a group, Taaffe provides a new way of detailing this army's chronic difficulties—one that, until now, has been largely neglected in the literature of the Civil War." (Inventory #: 3487)
$10.00 add to cart Available from Bay Leaf Books
Share this item